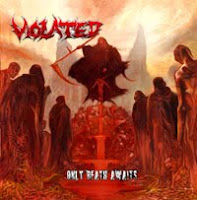 Violated are going on a few years now, but they're another entry into the massive explosion of old school thrash bands that is settling across the worldscape like an ever falling rain of ashes. They've got a very fast and exciting style, which seems to balance the faster German tones of a band like Destruction or Tankard with a brutal vocal edge that recalls the current of US tough guy thrash metal like Exhorder. Sadly, despite all their endless energy, Violated are another of these bands that just don't write anything in the way of new or memorable songs. They can all play their instruments like mad, with their arms and feet moving a hundred miles a minute, but I could not remember anything about this album when I was through listening to it.

"Out of Focus" is fast and furious and certainly angry thanks to Hans Wiks' gruff tones, but despite some of the band's spritely uses of higher string chords to punctuate the thrashing flood, it never builds to any worthwhile sequence of notation. "Lack of Empathy" slows for a neck breaking pace, and injects a little melody into the bridge, but once more, it's hampered by a lack of good writing. And there are six more tracks which suffer much the same fate. In fact, it is a strain to pick out any exceptions. "Vengeance of Time" has a hook to it that almost goes balls out power metal, but then it falters into a sequence of dull rhythms. The title track thunders forward with some bass, but even the bass is a bore.

Only Death Awaits is a frustrating album because I can barely think of the words to describe it. It's such a level playing field that never dares to ascend beyond the barriers of its own thrashing limitations. It's great to pay tribute to thrash metal by forming a new thrash band, fuck, thrash is pretty much my favorite form of metal music ever...but right now there are thousands of bands doing this, and all of them must face the same challenge of writing good songs, and sticking out, if they want to survive or create a successful 'second wave' of thrash popularity. After hearing this album, I can think of no means by which Violated will stand out. This is as forgettable as the last trip you took to the postal box to grab your mail, finding only bills and solicitations that you threw into the rubbish.