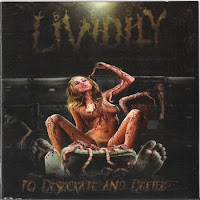 Lividity are one of those Midwestern death metal bands who have been plugging away for a very long time at what they do, 16 years in fact. To Desecrate and Defile is their fourth full-length effort, and a tight one. I've never really gotten into any of their previous releases, and this isn't about to change that, but I will admit that the band sounds better than ever before, with a good, vibrant thrust to the album (no pun intended) that lovingly delivers the bands sadistic, sexually charged debauchery. As usual, the album is loaded with samples, some from more obvious sources (like Jason Mewes or The 40-Year Old Virgin) and some from porn obscurity. Lividity have always had a stronger hand at these than most bands, they know where and when to place them to deliver the most 'thrills' (never just at the intro), and I'd almost consider them an instrument at this point.

The vocals are your typical Carcass or Deicide twin clusterfuck, with bludgeoning guttural death grunts and savage snarls. The drumming is fluid, and the guitar tone kicks ass. While the band's sound isn't quite original, rooted in the forefathers Suffocation, Deicide, Cannibal Corpse, and Morbid Angel, they have been at this long enough that they are no simple carbon copy. There is a playful edge to their deliciously menstrual ministrations that often erupts into some total slam death cheese (Lividity are one of the forefathers of that whole scene, whether the countless copies realize it or not), but I'm not complaining, because when these rhythms erupt I usually feel the urge myself. Just the right amount of compact, thick palm mutes, squeals and concrete rhythm. To choose some of the more standout tracks here, I'll go with the lurching "Surrounded by Disgust", which very carefully builds upon its slow pace with a caustic atmosphere of grinding guitars; "Cadaver Dogs" has a deceptively simple groove that becomes incredibly infectious once you give yourself into it; "Funerary Chambers" glistens like a freshly bloodied surgical blade, and "Orgasmic Flesh Feed" has some winding, hostile old school death rhythms which ride above its pummeling undercurrent like a subway molestor.

Also of note, Lividity offer up two covers of the German legends Blood: "Wie Krieger Sterben" and "Roman Whores", which are both thoroughly entertaining with their mix of samples, orchestration and grinding holocaust. On the whole, To Desecrate and Defile is an entertaining album. The band is not loaded with riffs like some of their peers, but the combination of samples, entertaining slam segments, and fist fucking faster death metal makes for a nice evening to spend with the kids. It's the best I've heard yet from the band, and perhaps good enough that I should take the stick out of my ass and listen again to their past efforts. Death metal, done American, done sexy and done justice.