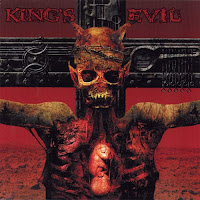 Japan has always excelled in the metal realm, with a handful of bands in each category, but pure thrash/speed metal from that territory has been sparse. Bands like Gargoyle and Doom fused thrash metal with a myriad of other influences, where Sabbat, Sigh and Abigail practice a more blackened hybrid. Perhaps the only consistent artist outputting pure thrash of quality would be Ritual Carnage, but there have been a few more to rear their heads across the years. King's-Evil certainly qualify for this category. Formed in 1989, the band's recorded output has been incredibly...uncommon. Deletion of Humanoise is their only album in 20 years, but I'm willing to bet this time frame includes massive periods of inactivity for the project.

If King's-Evil shares the same all-out-assault-on-the-senses aesthetic as Ritual Carnage, then it is no surprise that the two shared a pair of guitarists, Wataru and Masamichi Yamada. This is bludgeoning, fast paced material from which the starting point is earlier Kreator, tempered in a blinding melodic death. This was no band to dwell in the 80s, their energy and style could have easily appealed to fans of the explosive Swedish bands that dominated popular metal in the late 90s until the present. Yet Deletion of Humanoise still maintains a raw polish to the guitar tones which will have the old schoolers thrashing until their sweat paints the faces of every onlooker. Wataru's vocals have the same consternation as Mille Petrozza, and the drums are rarely not going off.

On the subject of going off, "Victim of Hate" fires off the race with a slew of winding, technical thrash melodies not unlike a Mortal Sin on steroids, the track rocking along with a furious gait that does not let up, fist after fist knocking you on the jaw. "Detonation" is much the same pace, with a more choppy verse riff and some sweet bridge rhythms and molten chugging below Wataru's yeti fucking howls. "Web of Lies" opens with an incredible brick flow of unbreakable thrashing, then moves into a speed similar to the first two tracks, though the guitars stick to you like wet concrete. "Fanatical Devotion" shifts from a steady bass hammer to some almost power metal picking and killer, burning lead, with Wataru's vocals on fire. Later, the band breaks into a very streetcore-thrash rhythm which is the perfect soundtrack to any downtown brawl.

Mad faith maniac
Over the grasp
Getting around in the darkness
No eyes
No thoughts
Showing ass in my field
Mastery offering me a light!

"False Pride" has a set of grooving, Slayer rhythms which coil about you in serpentine sensuality while simultaneously puncturing their fangs through your throat, and a nice, churning simplicity to the bridge riff that later explodes into the lead. "Punish With Death" packs in yet another intense reptilian groove, but at :50 it becomes this mesmerizing flux of Artillery and Kreator, sure to break your neck in the process of your enjoyment. "Core Dead" is perhaps my least favorite track on the album, but still has the band's sledgehammer precision, and the finale "Scream" compensates with a nigh endless stream of car crashing virility, the fastest and most relentless track on the album, with a climax bordering on frenzy.

Naturally, I'm a pretty big fan of this album, and am quietly crossing my fingers that the band can produce more. This is basically an extension of Ritual Carnage. If you like one, you will like the other. But unlike Danny Carnage's more recent vocal shift, Wataru keeps it lethal and venomous throughout all of Deletion. There are a few tracks which seem to follow the same pace, and it does make the former half of the album slightly repetitious. I also didn't care so much for "Core Dead" after the opening rhythm. The sound is explosive without any excess production, and the musicianship dead on. As a pundit for almost all things Japanese, and your metal attorney, I advise that you seek this out and secure a neck brace.