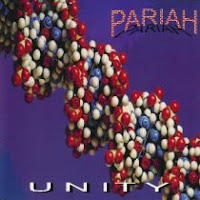 After taking quite the hiatus, Pariah would return in 1997 and release a third album in the following year. Gone were Michael Jackson and original drummer Sean Taylor, being replaced here by Alan Hunter (of NWOBHM band Tysondog) and Ian McCormack (ex-Satan, Battleaxe). Hunter's vocals were cleaner, not a far cry from Jackson's Grim Reaper-like tone on Blaze of Obscurity, albeit a little less corny sounding. The music certainly does not lack for the aggression of the past, because the riffing picks up right where that album left off...only with a more modern sound that makes them even crisper. There may be a slightly larger influence from rock and progressive rock on Unity, but it's not too distracting with the exception of 1-2 tracks.

The title track is the first, and it's also one of the best here...with Tippins and Ramsey returning to their well-composed, busy technical riffing, full of flighty little muted rhythms and some nice, shimmery acoustic breaks, all of which seem rock solid below Hunter's approach. "Reactionary" is one of those more experimental tunes...with some moody, mysterious rock breaks that pick up into a pretty generic NWOBHM rhythm, very Venom or Priest, but polished and clean. "Walking Wounded" is passable, but has some pretty dull groove rhythms to it, whereas "No Exit" features great speed metal licks beneath some atmospheric blues guitars and a cool effect as the chorus is ringed out into the stratosphere of the guitars. Also, nice leads on this one. "Snakes & Ladders" has some guitar masturbation for under a minute before the crisp thrashing tone of "One of Us" bites it on the leg. The riffs here are great, the vocals...not so much.

Well, alright then! As you can see, the lyrics of Unity are mediocre at best...like so many metal bands in the 90s, trying to appeal to the emotional and downtrodden like most popular music, but not in an interesting way. More like horse shit. It stinks, and you don't want to step in it, but you're not about to clean it up off the street yourself. Speaking of shit, the guitar work in "Saboteurs" is anything but, featuring jet fueled guitar rhythms which keep themselves busy as they meander below Hunter's whims. "Mutual Street" opens with some plodding bass and vocals, becoming another rocker with lame lyrics and Hendrix-like riffs. "The Jonah" is great, with some excellent speed picked rhythms and great little melodies below the bridge vocals. "Learning to Crawl" is a classical acoustic guitar piece with some vocals, to end the record. Not bad, though the antiwar lyrics are a little corny.

Of their three albums, Unity took the most risks...and because of that, paid the highest price, as it is probably their least appreciated album, even by the handful of old guards who even acknowledge this band's existence. I feel like there are 5-6 really great songs on this album, on par with Blaze of Obscurity...but the rest, like "Mutual Street" and "Walking Wounded" are mediocre stabs at something the band is not, and the calm, brief guitar pieces also belong elsewhere. This was the 2nd curtain call for Pariah. By the time it released, Skyclad was already climbing in popularity and it is unlikely the pages of this dusty old tome will be re-opened again. But we are left with a legacy of quality metal music, much of which still sounds fresh and relevant (well, some of the lyrics and vocals aside...)

Highlights: Unity, No Exit, The Jonah

Verdict: Indifference [6.75/10] (exporting your own brand of terror to us all)
Posted by autothrall at 7:42 PM