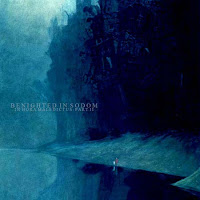 Benighted in Sodom has to be the grimmest thing to emerge from the state of Florida since Gatorland Zoo, and while I may slightly favor Matron Thorn's other band Andacht to this, the two have a very similar appeal...hostile and beautiful black metal with more atmosphere than a night on the Everglades with a bottle of Jack and a pistol with a single, reserved bullet. In Hora Maledictus Part II is the last year's sophomore effort, In Hora Maledictus Part I, and it's about as accessible as trying to ford a river of blood. Sure, you might make it, but not without a a glimmer of insanity, as you wade through the very primal sustenance that affords us breath, love, hate, pain, joy and existence. And if anyone saw you stepping out on the other side, they would never be able to shake that image from their memory.

I can shake this album from my own memory, but it's difficult, and requires something else as equally depressing or self-destructive. Or a Pixar movie. But the fact remains that Benighted in Sodom has produced one of its most haunting works to date, a turbulent savagery of some considerable depth and sorrow. Matron Thorn is not going to make this easy on us, immediately clouting us over the head with the intro "Stranded in Consciousness". This first moment of the song is harsh enough to shrink up the skin like a hot wind blowing out from the abyss, but thankfully it emerges as something more palatable and beautiful, if your ears can penetrate the wailing walls of tortured chords and rasping. "Dreary" lives up to the title, with a sparse blueprint of tinny, tin percussion and ringing, distorted notes that weaves a fabric of desolation over a hovering ambiance, until the track tears itself open like a burst womb. "Beauty in Exile" has some gorgeous, evocative synthwork snuggled behind its melancholic black skin, and the 13 minutes of "A Skeptic Between Lovers" transform your world from an asylum of percussive, hissing riffs to a tranquil setting that flowers and atones itself below a steady snare and hi-hat.

"The Constellations of Sedation" opens with a quote from Dustin Hoffman in The Messenger, and the guitar rhythm slowly churns across an internal galaxy of sluggish dementia. This was a very effective track with a dark, submersive atmosphere married well to the garbling rasps. "The Amnesiac Shore" is a beautiful song which reminded me a little of Portugal's Onirik, or Matron's other project Andacht. Such longing melodies, always grating, never taking the safe road. "Gravity Reconciled" builds a somber pattern over a depressive landscape to close out the album, with simple and careful tones that would befit some indie film about suicide, lost love, or addiction.

What could make this better? How about the fact that Matron Thorn is offering it as a free download over at his MySpace site? Since he's giving you an hour of gorgeous frailty and a soundtrack to your own inevitable suicide, why not offer your thanks? Pretty much everything this artist produces is quality, so as your metal attorney I will recommend a lot of drugs, a lot of failure, and Benighted in Sodom.

Highlights: Dreary, Beauty in Exile, A Skeptic Between Lovers, The Amnesiac Shore