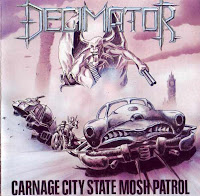 If Judge Dredd was not a comic, but a metal band in the late 80s, it would probably sound a lot like Decimator. Anthrax's "I Am the Law" was the default thrash metal tribute to the cloned law enforcer, but this obscure group took the concept and really ran with it, related lyrics running through both albums of their rather short lived career. As Hawkmoor and Elric were the inspirations for Hawkwind, the titular hard ass future cop Dredd was the inspiration for Decimator. What's even more fun, is that the vocalist Mad Dog seems to place himself within the mythos itself, giving the band a rather interactive conceptual streak which is both cheesy and endearing. If more information were readily available about them, I'd be glad to share it...alas, this is one band that even an underground sleuth like myself missed the first time around.

Now, Decimator were a thrash band, but they had far more of a roots metal influence than many of their more technical peers in 1989, and as a result I think this album makes for a bridge between thrash and NWOBHM. Not only in the riffing, but the deep vocals of Mad Dog remind me quite a lot of Lemmy or Cronos. They've got quite a tongue in cheek charm to them, and I find that necessary here, because the riffs are not all that standout to begin with.

Nobody move, I'm a riot pilot
I reach for my piece
As you reach for the sky
Get off your man
This ain't the mile high club
I'm taking over

"Raider" kicks off the album with some laughable takes of men pretending they are authorities in this violent, dorky dystopia, before Mad Dog exclaims 'I'm Lord Mad Dog, You Move And I'll Blow Your Fucking Head Off!'. I seriously blew the peppermint hot chocolate I was just drinking out of my nostrils when I heard that, and it really hurt! Now, had the band busted out some insane, raging apocalyptic thrash metal after Dog's statement, it could have been awesome. But this is really just a track akin to something Motörhead or Tank would write, with some slightly less bluesy leads. This is not one of the better tacks on the album, but there is just something about it which is enough to spark off the nostalgia. "Mutoids F.H.", or 'From Hell' (why didn't they just spell it out? Must be some Judge Dredd thing) is a a little bit thrashier, and here Dog's vocals really brutalize, while the guitars rock out to some playful squealing licks. "Blood Island" is actually a pretty good song, the best so far on the album, and a very nice mesh of the band's early 80s metal influence and the more modern brutality of the year this album dropped. When Dog rings out, it almost reminds me of old Hallows Eve. "C.C.S.M.P." is the title track, and this seemed built for the pit, with a slow bludgeoning gait and gang shouts over the chorus. Perfect for mangling mutants with your piece as you chase them down the filthy streets of Mega-City One.

"Devil's Bridge" sounds like a live track, since you can hear a crowd, but it may just be a sample or a live track mixed in with the band in the studio. I don't know, and really don't care, the song is reasonably fun, a bruiser with a corny chorus. If Lemmy were fronting Venom, maybe they might have written something like this. "Rogue Decimator" has a strong blues/hard rock influence to it, which is quite funny with Mad Dog's vocals roaring over it, but by far the worst song on this album for the rather generic boogie chords. "Dust Bowl" is all about the nukes, a scorching street metal piece with a dash of thrash, and the album ends with the two parter "Stealer of Souls", with even more of the band's pure Judas Priest-like street metal rhythm, and one speed picked rhythm that feels like its afraid to commit to some momentum, but the drums remain the same and the song never gets any faster than a trot.

Decimator sound to me like a band that were dabbling in the aggressive sounds of the time, but afraid to remove themselves entirely from the old guard of British metal. The result is something which stands out like a sore thumb, and I can see why success eluded the band. However, 20 years later, it doesn't sound any worse than it might have then. I really love the band's concept, and certainly their enthusiasm, but sadly I can't give this a glowing recommendation, other than nostalgic reasons. The songs just aren't that consistent, and of the 8, only 3-4 really rock.