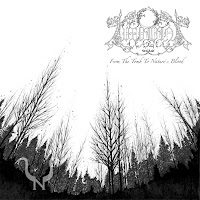 Spain's Lux Divina have been around for over a decade now, releasing a few demos and an EP around the turn of the century, and taking their time to produce this first full-length debut. Though the result is not the most thrilling pagan black metal you'll hear in this year, it's competent and well-performed, capable of producing a fine atmosphere that rekindles early Borknagar, especially through the use of Norax' clean vocals which blend in well over the thriving acoustic segments and glorious tones of the chords. Make no mistake, From the Tomb to Nature's Blood is not re-writing the book on the style, as hundreds of bands have previously mixed their harsher black metal side with the folk elements, and lyrically Lux Divina offer up only the most basic lyrics that pay tribute to the forest, the times of old, and whatever pagan gods they libate.

"Forgotten Deity (Deletrix) Part I" lets a few chords ring before storming forward into some adequate, melodic black metal, with a mix of deep clean male vocals and Norax' biting snarl. The note selection is glorious enough to conceive a rapturous momentum, but it's not exactly stunning. "Bloody Herbs of Revenge" and "Praise Hymn to the Horned God" feel like more of the same, with a good balance of plodding, woodland acoustics, soaring clean vocals and repulsive yet graceful black metal sections. I found most of the album's stronger moments to arrive later, like the beauty of "The Oracle of the Funeral Trees" or the creeping shadows of "Black Goddess' Mountains". "To Darkened Catacombs" also has a great rocking out feeling that pagan black does not often create. I didn't quite like the short vocal piece "Serpents Philosophy", but it's pretty folkish and lets Norax get that out of his system.

From the Tomb to Nature's Blood sounds pretty good, the tones are earthen feeling and all the instrumentation is clear, without the vocals ever dominating too fiercely. There is a strong core to the band, though they could sharpen up their riff writing. It's a decent effort from a country which is starting to produce a lot more in the black and folk genres, and since I don't always associate Spain with the Northern European history, a slightly different take on that style.

Highlights: The Oracle of the Funeral Trees, Black Goddess' Mountains, To Darkened Catacombs