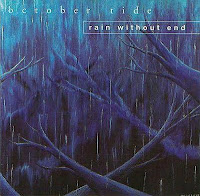 It has always stumped me that all of Katatonia's mid-90s efforts were perfected not by Katatonia itself, but two of its members writing under another name. This is not to take away credit from the great works of the last decade beneath their primary outlet (Brave Murder Day, Discouraged Ones and the excellent Tonight's Decision), but Rain Without End does steal a little of the band's proto melodic doom and convert it into something far stronger riff-wise, and more digestable at the other end. Another pretty obvious similarity is to fellow Swedes Opeth. October Tide does not use many acoustics here, nor do they write tracks quite as long or complex (as in the riff quota), but what they concoct has a similar atmosphere, if not superior.

Jonas Renkse handles the vocals for the debut, in one of his last performances as a growler. There are some clean vox in spots that sound like Katatonia, but much of the album is delivered through Renkse's brutal sorrows, which are not a far cry from Swanö or Åkerfeldt. The guitars are unanimously sad, but the riffs are stunningly beautiful, in fact I'd go so far as to say they are the match for any Katatonia or Opeth record, at least here on Rain Without End. Each is crafted to deliver maximum melodic metal sorrow, reminiscent of Paradise Lost's Icon from a few years before. Renkse's drums are not at the forefront of importance, they simply amble along the guitars to keep their pace. It is the guitars, performed both by Renkse and Fredrik Norrman, that catapult this record into classic status.

Least of which is not "12 Days of Rain", which opens in a grandiose, slow waterfall of stinging tears, a tale of hope and renewal. One of the strongest riffs I've heard to open a doom metal album ever, and once it hits its Paradise Lost/Metallica-spin in the verse, Renkse unleashes the throat. "Ephemeral" follows, perkier until its own verse, in which another of the band's insanely catchy dual melodies rolls its melancholic tongue across your neck. The track transforms into some acoustic grace before a great climax in which a wall of chords smothers a softly glistening melody. "All Painted Cold" offers a desperate and beautiful riff, before it too slows into a creeping portrayal of memory and loss. Again, it breaks for an acoustic segment, which in this case transforms into the track's penultimate melody. The first segment of "Sightless" is much like what Queensryche would have sounded in 1988 had they been fronted by Swanö and not Geoff Tate, though it soon eschews any of its graceful fluff for a somber, drowning hymn of brute chords.

"Losing Tomorrow" is a brief track which diverts towards some echoing ambience, acoustics, and samples over which Renkse gives a clean, gothic performance not unlike what Katatonia were up to at the time, or Mattias Lodmalm and his Sundown/Cemetery. "Blue Gallery" is a little more 'metal' and 'evil' than anything before it, with a nicely written dual melody where one of the guitars winds over some sad embellishments from the other, then to converge into grace right around :45. The later half of the track has some other riffs which suffice, but may be the only point of the album where I found myself dozing off (in the bad way). "Infinite Submission" brings me straight back to attrition and awareness, with more sparse melodies that shiver below Renkse's crumbling throat. The ambient breaks later in the song are breathtaking, and I almost wish these guys would score something using similar music one day. Of course, these end with another, huge riff...it's a very simple chord progression, but when you stop and let it carry you, it catches up long after you finish listening.

Rain Without End is amazing. So good, in fact, that I can see why the guys decided to shelf the band after a few recordings...it would have created a natural 'conflict of interest' with their other band, which was walking a similar path, though that road has later taken them into far more gothic rock accessibility. But honestly, how could this be improved on? Any attempt would be more likely to fail or disappoint than exceed this beauty. If you enjoy Katatonia, Opeth, Cemetery, Lake of Tears, early-t0-mid 90s Paradise Lost, or later Tiamat, and have somehow not heard this band...well, those are your marching orders.

Highlights: nearly everything on this album...but to choose a few, "12 Days of Rain", "Ephemeral", and "Infinite Submission" for its beautiful ambient segues.