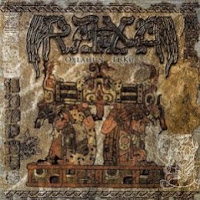 It's strange to me that you have to travel to Russia to find some of the greatest Mayan folk metal ever conceived (also some of the ONLY Mayan folk metal ever conceived), but Raxa is the living proof. This is perhaps the best of the many projects of the prolific and brilliant Lefthander, who performs all of the instrumentation here. The style is death and doom with a heavy use of keyboards to conjure archaic atmospheres, Left has a glorious take on the subject matter which reminds me a little of the synth laden projects of Swedish maestro Dan Swanö (Moontower, Karaboudjan, only not as prog or weird), but with its own distinct voice.

Unlike Lefthander's gothic/melodic/doom project Sea of Desperation, the Raxa material is highly consistent and truly immersive. Left opens a window, and you look through, slowly becoming drawn to the ancient cultures and landscapes that he is dreaming forth. Samples, percussion, and gorgeous synths all simmer into the imagination, while chords and chugs drive the compositions into a metallic dirge. Of the three albums thus far, Oxlahun Ti Ku is the most rough about the edges, yet even here I found nothing but 40 minutes of captivation and soul searching in a culture I have never known first hand.

"Ni Cah Raxa" inaugurates the epic with lush synth vegetation and birds chirping, flutes ringing out across ancient, crumbling structures before a powerful, mystic synth line rolls forward. The title track lays down some low ch-ch-ch-chug, which of its own accord might not be so interesting, but applied to the synths and Lefthander's deep grunts creates a portal to the brutal and beautiful experience. "Tzonimolco" builds a freakish, insect-like ambient loop and some distant vocal samples and percussion into a brooding, low string synth that resounds like a survival horror film set deep in a South American rain forest. And then comes forth the doom. "Mimixcoa Icuic" gets brutal, with an eerie synth alongside the slow grinding of its guitars, but also has some moments of stark beauty. "Citialin Calpolli" is a slow ascent to the elder skies, and the secrets within, through wondrous use of strings and keyboards. Perhaps here of any song on the album, the drum machine does feel a little weak, but never too distracting.

The latter half of the album is equally strong, led by the thundering chug undergrowth of "Xippe Totec" and the more Therion-esque grace of "Tlaloc". "Iamat" debuts with a double bass drive and some lovely synths and flutes, while Left's voice pans and echoes across the landscape. "Ma Xipatinem" is another beautiful, elegaic piece with some creepy vocal samples that haunt the bridge, and the album ends with the delightful instrumental "Nahua Cochi", casting it out into that same ceremonial night from which it manifested.

Like his even more prolific countryman Senmuth, Lefthander is a one man force...clearly capable of writing in several instruments and mixing his own album very well. There is a good balance here, though like Senmuth, the guitar sound is not quite strong enough yet. But in lieu of that, this is a great debut album which is well worth a listen...it is high time we heard more folkish/atmospheric metal covering the Central and South Americas, regardless of who conceives it.