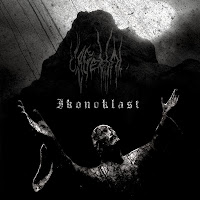 Urgehal has never been one of my favorite Norse black metal bands, but much of their discography is reliable if you're in the market for some blasting hostility. Ikonoklast is their sixth album and suitable for fans who want a little grisly death injection into the momentum of the thundering black metal holocaust. The band specializes in very thick, simplistic guitar rhythms with an influence of Mayhem or Celtic Frost/Hellhammer, but the real star of this show would be the vocals of Trondr. He knows how to put just the proper amount of reverb on them so that they cast an eerie spell over the blasting undercurrent, and honestly, if it were not for this one aspect, the remainder of the music would feel like mundane energy of ill intent.

"Stesolid Self-Destruction To Damnation" coronates the album with a sweet sample from the 30 Days of Night film adaptation, before some broiling leadwork and the ever churning tempo of the guitar rhythms. I liked the way the bass morphed below the riff at around 1:00, but otherwise this is a come and go song without a great many enduring moments. "Dødelagt" fares a lot better, because it sounds liked a goddamned tank escaped Apocalyptic Raids somehow and wound up rolling over this band's jamspace. "Cut Their Tongue Shut Their Prayer" is much faster than the first two tracks, and develops a nice evil trill to the verse rhythm and some excellent vocals. "The Necessity of Total Genocide" takes the band in the opposite direction, to a slower, evil segment of frightening chords that rocks up to a mid paced level. The bass in "Kniven Rider Dypt I Natt" is pumping, and the track feels like it has a good hardcore injection. Other notable cuts include the vile "Astral Projection to Rabid Hell" and the utter blitkrieg that is "Holocaust in Utopia".

Ikonoklast sounds as cavernous as a war-torn black and white city covered in dark, broiling smog. It's crushing and heavy and does not give a fuck, the way most black metal albums of this variety best operate. Most of the memorable moments are created through the atmosphere and vocals rather than any excessive skill at riffing, but there are a few which do dominate. I cannot say it's the most compelling or blasphemous work I've heard of late, but it is at least solid, and in some places, truly grim. Definitely one for the fans of louder, caustic black metal which can peel the paint off brick and mortar in the name of nihilistic fucking warfare.