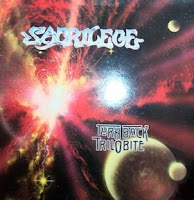 As a great man (or troupe) once exclaimed: and now for something completely different. If you couldn't see the Sacrilege logo or the faces of the bands on the album, it would be extremely difficult to make the connection between Turn Back Trilobite and the previous two albums. This was probably an enormous turn-off for fanatics who were hoping the band would return to its punk-fueled style after the very mediocre speed metal of Within the Prophecy, and yet...Turn Back Trilobite is an original and compelling work which, in my humble opinion, is the best of their career. To describe this album is to describe a hybrid of speed, thrash, 80s power metal and a more morose inkling of traditional doom, all unified for a concise, conceptual album that blurs the lines of science, Hinduism and philosophy with concerns to our universe and existence as a species.

Of course, this sounds a lot headier than it really is, and I must warn you that Turn Back Trilobite is a mellow album for the most part. If you expect ceaseless tirades of punkish metal energy, go back to their 1985 debut. These songs are written carefully, tending towards a slower pace, and more than any other effort, Simpson gives her voice a chance to breathe out its notes. The bass player here is Frank Healey (Cerebral Fix), replacing Tony May from the prior album, and he doesn't do a lot, but his tone pumps nicely below Damien Thompson's melodic picking, the true backbone of the album.

"Father Time" evokes an instant, cosmic doom through its one man dual leads, while the drums simmer off from a tribal opening to a drudging, doom beat. The overall vibe is reminiscent of Fates Warning's No Exit or Perfect Symmetry, though the riffs are far more Sabbath and the tones warmer. Simpson uses her voice like a traditional doom narrative, though the vocals on this track are not my favorite. "Silent Dark" is a little catchier, especially how the bass plays with the little lead in the intro, and each phrase spans out like an interstellar jellyfish deciding which moon to land itself on. The track becomes even more glorious as it picks up speed, a good classic rhythm pumping along and some really great riffs like that at 2:25. "Soul Search" opens in glistening, pensive acoustics and bass, cavorting into a sad, bluesy solo. Much of the song stays in ballad form, though the bridge and solos are delivered through some simple metal. "Awaken (Suryanamaskar)" has a playful boogie to it, very NWOBHM, with Thompson again flexing his lead chops against himself and a dark Fates Warning-like rhythm in the verse. Tam's vocals are great here, like if Kim Gordon of Sonic Youth was jamming with Tony Iommi.

You came to me when I was poor
Gave me riches sweet and pure.
Touched my soul and gave me peace
In your warmth life's new release.

The "Key to Nirvana" begins with more of Thompson's glorious melodies; it's a fair song which revisits some of the rhythm of "Father Time". However, the nearly 12 minute epic "Into the Sea of Tranquillity Parts 1-3" will have to take the cake as one of the more immersive works of their career. It starts with beautiful ambiance and acoustics, slowly evolving into a huge melodic doom riff that makes you feel at once baked and floating. Basically, it's Sacrilege doing a take on some 70s prog that flavors itself with graceful melodic leads, and there are some great moments near the end where her voice rings out across the acoustics and the band simply becomes... something... else. "Equinox" is the finale to both album and career, evoking strange space noises, roiling bass and more of the tranquil acoustic guitars before picking up into a lurching melodic gait. The bridge rhythm and leads later in the track are quite good.

Despite its sedate nature, Turn Back Trilobite was such an original work in its day that I must recommend it to fans of traditional doom metal and progressive rock. Tam's voice is not 100% with it all the time, otherwise I'd like it even more myself, but there is no doubting the vision and depth that took place here. Extremely far removed from their prior recording output, it sits alone, an anomaly of metal which went straight over the heads of its intended audience, who will still too busy jacking themselves off over ...And Justice for All and South of Heaven to notice.

Highlights: Silent Dark, Into the Sea of Tranquillity Parts 1-3, Equinox