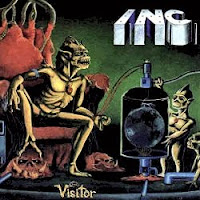 Oh, Christ...cover the eyes man, cover the eyes. Well, I guess it could have been worse, because at least this cover art features some semblance of a logo, and who knows...maybe the aliens really did look like that, and it's an accurate rendition. But what really matters is the music, and I.N.C. deliver here an album that wallops its predecessor in every category. The songwriting is tighter and more impressive, without losing any of the bands bludgeoning guitar tone. The sense of humor has been ramped up, especially through the first three tracks, and in lesser hands...this may have shattered my appreciation for the album. But Indestructible Noise Command are having a genuine good time, and I remember listening to this album many times over when it came out.

The roster was not altered for the sophomore outing, and Gergely's vocals have honestly improved, with more of an aggressive snarl to them which slices through the dense rhythmic chugging like a fine knife through a thick head of cheese. The songs are also a lot shorter in general, with a few that pass the 6 minute mark, and of these, only "Bedtime Stories" manages to briefly grind on the nerves for a little too much of the chug rhythm.

But first, the inimitable "Dry Heave", a song both punishing and fun. Funishing! After an opening segment of some of the most extra-terrestrial vomiting that I've ever heard, I.N.C. charges straight into one of the happiest thrash metal rhythms of all time, eclipsed only by the laughable and awesome chorus: Your words and thoughts are equal to a fuckin' drunken dry heave! It sounds like a television commercial, but the verse guitars are so explosive that I feel the strings of my 16 year old moshing control begin to tug at me. "Bedtime Stories" follows, which is mostly a moshing slog ala Speak English or Die, improving wherever it picks up in pace. "What Are You Looking At?" is the longest song on The Visitor, but it's built over dynamic thrash riffs, and one of Gergely's most insane vocals, as he opens several verse lines with Tom Araya-like screams. "Thunder Struck" is another riffing beast, a dark hammer of thrash knocking you upside the jaw, even though the lyrics are a little quirky.

Impossible to stop the pain once i have begun
Break your legs in seven places
Than I'll let you run
Traveling at the speed of sound
Hear my engine roar
When you think it's over I'll be coming back for more.

Say what? Next, "The Visitor" arrives with its implied alien invasion, a tale of humanity that must endure the unknown to protect their domain over Earth. Okay, so it's not quite this epic in value, but the riffs are worthy of any War of the Worlds parody and there is a great breakdown with some busy bass and chuggernaut guitars. "Scammed Again" is one of my favorite I.N.C. tracks, Gergely screaming in step with the opening guitar volley, and then more of their super fun anthems like "Dry Heave". A very calming song, with a message of peace to all the cons and crooks of 80s advertising. I love it! "Hypodermic Coastline" has a nice intro, with some Spanish guitar work that has little in common with its lyrical theme...for this is about the pollution of our Earth seas, and has the best scream of the word 'Bacteria' in all human history. And of all fucking things, the Indestructible Noise Command crowns off the album (and their career) with a cover of The Cars' "Candy-O", which sounds fun with the chugging guitars but not a far cry from the original.

The Visitor holds a lot of good memories, but beyond the nostalgic factor it's also not void of musical merit. Most of the songs are packed with catchy rhythms and I'm surprised the band did not achieve a higher measure of success, confined to the vinyl dustbins where most thrash of the late 80s was unfortunately sentenced to a long death. The album is, at times, stupid, but never pretends otherwise, and the riffs are a little more complex and engaging than on Razorback. It still sounds pretty good, having lost only a little audio shine since its release. If you enjoy fun thrash metal, like Anthrax' earlier work or some of today's retro crop like Municipal Waste, then it might tickle you to listen to this.