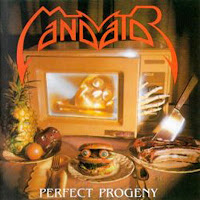 Now that is a fun cover image...

Perfect Progeny is the sophomore effort from the Dutch thrashers Mandator, after the less than stellar debut. Changes have clearly been made for this album, as the band creates a far more straightforward, aggressive thrashing sound. Peter Meijering had departed the band by this point, and Marcel Vedurman assumed the vocal duties in addition to his guitar. There was also a new drummer in Walter Tjwa. Hette Bonnema's bass playing here has ramped up, but the band has wisely turned up the rhythm guitar so you get a sampling of it at just the right frequency, under the roiling, dirty riffs.

Overall, this is a more focused album than Initial Velocity, but it does still suffer from a little too wanderlust. "Stick Your Knife" opens with violent, crunching speed and Vedurman's cruel rasp, not unlike Destruction's frontman Schmier, but thicker. There are a few points at which the song breaks into a lackluster riff, and I'm not sure the popping bass Bonnema throws in was necessary. The leads after 3:30 are excellent, though, and the bass gets interesting as well. "Coitus Interruptus" sticks and moves with jabs of punctual mutes below the verse vocals, and then transforms into a charging, bludgeoning thrash rhythm interjected in brief leads...this is an interesting song with a curious energy, and some well written components, but it does leave a strange taste in the mouth. "Surrealistic Maneuvers" is a brief instrumental with guitar effects and forgettable lead, and then "AIDS" opens through more of the band's great ear for leads and then goes downhill with a long series of boring mosh riffs.

The latter half of the album does pick up a little. "Brain Desire" has a lot of riffs that remind me of Master of Puppets or ...And Justice for All, except that they don't all flow so well together and the track can become rather jarring. "Perfect Progeny" itself has a good momentum, and before the 2 minute point it breaks off into some guitar work that reminds me of the first album from Mandator's countrymen Pestilence, and this is pretty cool. The best song on the album, at any rate. "Automatic Artillery" once again reminds me of old Pestilence, and "Life is Calling" is a decent, driving anthem which successfully revisits the bands speed metal roots, with a molten thrash shell and some excellent guitar parts.

Truly, these last three tracks could have just as well been released as an EP and kicked some small measure of ass, but all of the tracks leading up to this are unremarkable, with the exception of the lead melodies. I feel that if Mandator had written a 3rd album, they might have continued along this route and produced something worthwhile, but it was not to be. Members would pop up again, most notably Marcel joining Altar and Orphanage later in his career, but this band has been consigned to obscurity ever since. Mandator was a band with a few good ideas, and a few decent songs, but they were up against every ten ton elephant in the room, a common symptom of the 80s in which you only had so much $ to spend on so many records. This is the better and more concise of their two albums, and at least the last few tracks are worth a listen.