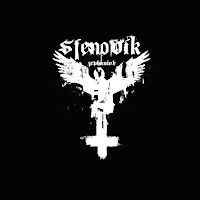 Arizona's Sjenovik are a difficult band to categorize, with a name taken out of Slavic lore and a style that really only begins with black metal, and proceeds to journey into a bleak nether realm of noise and structure. Zephaniah follows the interesting Jouissance from last year, and contains another monolithic implication for the future of US black metal. For, like any of my countrymen to better perform this style, they do so by thinking outside the proverbial box, by initiating a wanderlust that captures the flaking decay of their environment, the corroding heart of our culture as we lose further touch with our roots in the name of glorious, crass commercialization, diversity, and the American Way According to MTV™. Sjenovik offers a release from this, at least for 37+ minutes and six tracks of pensive, brooding indulgence.

"Part I: That Which is Above..." is an extended intro with some haunting and harsh swells of synthesizer, laden in beautiful acoustics, an eerie bow sweeping across the background. It's a gorgeous piece of music, and immediately raised my hopes for the album. Of course, this is only one small part of the portrait that is Sjenovik, as the "Eclipse of Perpetual Loss" immediately corrects any assumption that this will be tranquil, easy listening. A slowly sliding black metal track, with vocals in such torment that I'm surprised the singer was not in the process of killing himself during the track. I guess not, or I would never have heard it. The track does veer into some melodic moments, with penetrating whispers, and flows very well into the acoustics and ambience of the next piece "Flesh of Man: Martyrdom" which eventually transforms into the most vicious and 'pure' black metal writing on the album. More whispers, but they arrive over a thundering melodic wall of soaring rhythm and the painful vocals of James Johnson strike some of their most desperate tones. "Part II: ...is Like That Which is Below" once again delves into some lush acoustics and shrill dark ambient soundscapes, before the short and sharp title track emits another blackened hue of introspective witchery.

But the foundation of this album is really laid late, on the final track "Day of Wrath", an 18 minute excursion which comprises half of the album. Wholly terrible and awesome noise transforms into some killer riffing and drum collapse. Yet, instead of just bursting into another black metal track, the band keeps the noise going over the top, and it becomes a truly disturbing work, by far the apex of Zephania and really engaging. These guys even add some choir samples later in the track. I would pay to listen to an entire album of just this style, but I do appreciate the band's desire to mix it up. Sjenovik capture quite the range of dark emotion on their sophomore effort, and while the intricacies of "Day of Wrath" might reach beyond the average listener, who has no interested in well constructed noise like my drugged (yet sober) self, I have to recommend it. Some of the tracks are not quite so experimental as others, but it is their unusual combination which enthralls, and I daresay we have another artist here who knows how to walk the 'art' side, without the implied pretensions.

Highlights: Day of Wrath is perfection, the rest are just, you know, good.