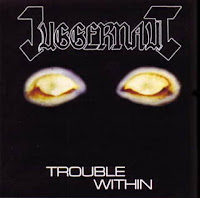 That's right. What the fuck is that on the cover, you ask. I don't know exactly how to answer that question, but if the purpose was to catch your attention, well it worked. Trouble Within is the second and final album from Texans Juggernaut, following Baptism Under Fire a year before. Where that album was a crude, if occasionally interesting blast of character, with a few tunes that stand out in a drab, crunchy crowd, this is a slightly less remarkable piece which was certainly a prelude to a split in the band.

The lineup of drummer Bobby Jarzombek (Halford, Demons & Wizards, Riot, Spastik Ink), bassist Bobby Womack and guitarist Eddie Katilus is joined here by Steve Cooper, who also fronted S.A. Slayer. Cooper is replacing Harlan Glenn, whose snarling, charismatic vocals were one of the factors that saved Baptism Under Fire from complete obscurity. I can't really blame the album's faults on any one element, least of all Cooper, who approaches the material with a lot of high pitched screaming and classic metal vocals that, while melodic in of themselves, don't always seem to match up so well with the loudly podding bass and boxlike crunch of the guitars. The musicianship on the album is quite good, in particular Womack who is flying all over the place as his strings pop and thump. Its much cleaner than its predecessor, which was a crunching, burning wreck, but then I kind of liked that...Trouble Within is not completely departed in terms of its writing or overall style, but this album feels safer. Too much so.

"Without Warning" begins with a string of technical, crude thrash notes before the speed metal of the verse...almost a primal cousin to Watchtower, though the riffs do not complement one another or create a similar, strange immersion like that band. "Vengeance" has some great bass playing, and Jarzombek is also getting crazy here, always an interesting fill or rhythm being nailed out below the guitars and vox. But once the fog clears, there isn't much to draw you back into the song. "Russian Roulette" uses some percussive muted rhythms to create a strange trip, like a "White Rabbit" thrash throwdown, but the busy bass and quirky guitar rhythms are the only real highlights, and the wild fusion solo is an earsore. "The Calm Before...the Swarm" starts with some very cool prog keys, before becoming a slowly crawling oddity with a few interesting bits and the rest throwaway.

The title track is actually the best thing on this album, and the most like Watchtower, with some intense technical speek licks courtesy of Eddie Katilus, and an almost Queen-like flair for dramatics in the vocals and structure. "Weeping in Fire" continues this trend, wildly inventive and melodic, with Cooper using his clean high range percussively over the drums. "Onslaught of the Hordes" is interesting only for the bass playing, and "The Pirate's Blade" is just not as cool as the name, though there are some backing vocals that combine with the slugging guitars and very trebly bass to create an atmosphere larger than most on the album. "Stellae Rubae" is a melodic instrumetal piece to which I am more or less indifferent, and the closen 'hidden' funk/rap track is...well...more dated than Celtic Frost's "Human" intro.

Trouble Within is kind of a tragedy, because the instrumental skills of the band are fully capable of impressing and delivering memorable hooks...yet the rather lame sound of the album truly disables its potential. The bass is just too funky and loud, I know some bands prefer this style (Sadus' bass-driven madness, for example). I don't think this is always necessary just to rally against the misinformed perception that bass players are not important. Bass is extremely important, but it also has to do its job. Womack is an insanely talented player, but the decision to have the bass so poppy and pronounced often makes the album sound like shit, especially with its mid to high tone. There are also no tracks on this like Baptism Under Fire's "Slow Death", which, despite its bludgeoning stupidity, has always remained embedded in my memory when I think of the band. If you want to hear and album that was trying something a little different than the often brazen sounds of contemporary 80s thrash artists, certainly this qualifies for a sit through. But it's simply not good.

Highlights: Trouble Within, Weeping in Fire