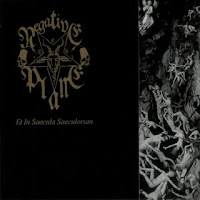 Despite their rather limited discography of yet, Negative Plane are one of the very best US black metal bands out there, with a fresh take on all the classic sounds of the genre's past, from Bethlehem to Mayhem, from Hellhammer to Mercyful Fate to Venom and even Necrophagia. Though Et in Saecula Saeculorum is their sole album to date, it is superior to what many of their contemporaries have accomplished even after long careers. For this former Florida act, atmosphere and songwriting are the two critical components. Nameless Void has an excellent vocal style which crashes and collides off through the resonant, dark melodies and sinister drumming, and he is not afraid to dowse the already menacing tones with added effects to make them even more cavernous or carnivorous...like some high priest to an Elder God, invoking the formless shapes of nightmare into our reality.

Though the vocals alone put the album over the top of most anything you hear from a 1-2 man project, the music itself is also brilliant, a hybrid of archaic black, doom, thrash and heavy metal sounds which sounds like some long lost, restored classic rather than a modern work. Yes, Et in Saecula Saeculorum could just as well be an influential album from 1992 or 1993, it sounds so dark and formative like matter emerging from chaos. Bestial Devotion is a drummer who hits hard, and the loud crashing cymbals work wonders alongside Void's adventurous rhythms. This is an extremely grim work, yet not in the same way you'd think when hearing the term from so many other black metal albums. This one is close enough to original to matter.

The intro to "The Chaos Before the Light" swells with haunting choirs that almost hiss at you the ancient wisdom of the dead, and then some horn-like strings hum into a descending wall of chimes that suddenly erupts into a violent, grinding black riff with Void's growls and some sliding, warped guitars. A Celtic Frost-like rhythm then bridges an excellent, thrashing riff before the 3:00 mark. Negative Plane create longer songs as a standard rule, but they never become indulgent slabs of boredom, there are truly enough riffs to carry the weight. "Staring Into the Abyss" opens with a downward, doom melody that would not have been out of place on an album like S.U.I.Z.I.D. or Sabbat's The Dwelling, black and crushing below Void's fucking killer vocal rites. If this song doesn't turn you over to the devil, or the dark side, or whatever you want to label it, then I just don't know what can. "A Church in Ruin" opens with saddening organs...and truly this is an anthem of sunken faith, with menacing segments like the drums and melody aftre 4:00. "Death Mass" is simply one of the most brooding and disturbing, brilliant works I've ever heard in this genre, both chaotic and glorious, with killer, driving rhythms and thundering kit work.

A thousand eyes illuminate the mist
revealed visions
showing the other places
unbound by the chains of existence
beyond the hated stench of life
For we are caged in bone, flesh, and blood
Spirits of the void bound to decaying human flesh

Creepy, and not once dull in over 9 minutes. "Unhallowed Ground" surpasses even this, with nearly 10 minutes of grim psychedelia captured through creepy guitar effects, plodding bass and sparse, level percussion. This and the following organ instrumental "Trance of the Undead" make a wondering pair, fit for any funeral of the mind...conjuring black and white occult and horror film memories as if they were the standard for this frightening universe of sound. "Advent of the Beast" rocks out to the end of the album with some blasting and cavernous, crawling black metal born from the dead of night.

Despite my obvious love for this album, I cannot say for certain it's perfect. Of the many riffs, about 19 out of 20 can draw the black ichor weeping from my skin, but there is the occasionally part which doesn't hold up to the rest. The vocals and lyrics are well done libations to the occult and the realm of the dead, and the fact that two people created this is impressive. Negative Plane have all the tools to be the next major face of USBM, alongside luminaries Xasthur and Leviathan. I am eager to hear more.

Highlights: just hope for a swift death and devourment when the walls of reality begin to tear and the hunger of the unknown begins.