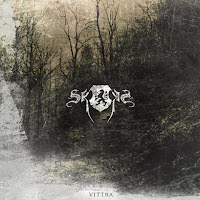 Skogen are the latest Swedish export specializing in atmospheric black metal, and judging by this debut, they know how to take their time with it, to let each composition breath the northern air and sink into the soil of their homeland. Light flights of synthesizer and monumental atmospheres combine with carefully paced guitar rhythms and a mixture of full throated growls and soaring clean male leads. I hear a little Primordial and Drudkh influence in the way the riffs progress through the album, but also a flavor of slower gothic doom bands like October Tide and Katatonia, if only for the melodies being evoked.

The band is only a duo, yet they manage to produce a sound larger than most fully staffed bands. Just don't expect any quickening of the blood or explosive intensity, because the album is as chill as the landscape it celebrates. It's also a decent length, almost an hour of music here. "Dimfärd" is a solid inauguration, as slowed down, shining guitar chords (reminiscent of early Borknagar, at half the speed) drive into the massive mountainous atmosphere. "Skuggorna Kallar" features a weeping guitar melody over its next frosted bank of chords, and a break where only the synth and percussion ramble along before some waves of notes transform the rhythm back to the saddened core. We're already 19 minutes into the album, after only two songs, and a 3rd epic is delivered through "Eld", with a brief acoustic intro and then more of the bands soaring, tearjerking melodies. After this, the fare becomes briefer, with a few fine acoustic instrumentals littered about ("Höst" and "Skyming"), and some more glorious metal in the sluggish burden of "Vålnaden", the fastest track on the album "Under Fullmånens Sken", and gorgeous lamentations of the closer "I Skogens Djup".

Vittra's a beautiful find, even if it doesn't satisfy throughout 100% of the playtime. There is a sense of predictability to what the band offers, but it's still a great album for a walk in the woods on a cold afternoon/early evening. Most importantly, the band have achieved a reverberous tonal quality that amplifies their atmosphere. The album sounds so melancholic and vibrant that you can often forgive the lack of complexity. If you enjoy slower pagan/black or melodic black metal, or even melodic doom, it's at least worth an hour's investment of listening.