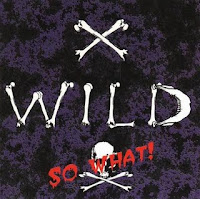 Formed by three former members of the great Running Wild, X-Wild is further proof that the apple does not fall far from the tree. Their first album, the unfortunately titled So What!, is an exercise in pure German power metal that sounds a lot like something Rock'n'Rolf Kasparek would write. But can you ever have enough of a good thing? Answer that for yourselves, and you will have determined whether or not it's worth the time to check out this debut album. Granted, So What! also takes a few hard rock liberties, similar to Accept, Grave Digger and Running Wild, so this album isn't always 100% what you are expecting.

Frank Knight's nasal range actually places him somewhere between Kasparek and Dirkschneider...he uses a lot of Udo's rock & roll antics, but has a lower pitch, rarely raising the siren. It's pretty dirty and it works well, as Knight has a harsh bite that I'd much rather listen to than any wailing, 'clean' power metal vocalist of the Tate school. His tones help make the material here street ready, while the trio of Becker/Schwarzmann/Morgan rampage through a solid pile of riffs and a few really catchy tunes.

"Can't Tame the Wild" has a bouncy, mid-paced energy which, alongside Knight's circus freak, narrative vocals, creates a fairly goofy intro, before the Running Wild worship erupts in a riff that would have felt just at home on Blazon Stone or Death or Glory than it does here. "Dealing With the Devil" again apes Running Wild, a lot like "Raw Ride" from Under Jolly Roger in that you could ride your motorcycle to this and kick a poseur as you speed past. "Scarred to the Bone" and "Wild Frontier" are both fairly forgettable knockoffs, but "Sky Bolter" has an uplifting thrust to it that does not disappoint. Here the album begins to take a slightly diverted path which reflects a more widespread influence, as "Beastmaster" is slow moving, hard rocking and "Kid Racer" is a total oldschool German blast (and one of the better speed songs on the album).

Suck up the gas, foot to the floor
Engine is screaming, I gotta have more
It''s people like you, I don''t wanna be
Hey you over there, why are you looking at me? Oh God

Oh God is right, and So What! is not an album one should turn to for lyrical enlightenment, though the words are often amusing for their tongue in cheek qualities. "Freeway Devil" is another pretty good racing tune, with the pirate metal overtones in the riffing. "Mystica Deamonica" is where the album swerves most into the hard rock territory, and yet, despite all the cheese, it's honestly one of the better X-Wild songs throughout their discography. Catchy through a very simple set of chords, with a great song title = chorus part and a kickass bridge around 2:30 that I bet David Lee Roth wished he had come up with. "Thousand Guns" is total Accept worship, with the ballsy chorus and big hard rock riffs, and the album closes with another faster paced track "Different (So What)" which has some barbaric, meaty power metal rhythms.

So What! is a straight shooter as far as its production values, probably owing a lot to the individual members' backgrounds on other albums by Accept, Running Wild and Grave Digger. It sounds good at all volumes, and the musicianship and riffing is tight enough to show that these guys were going places. The only real downside (aside from a handful of mediocre tunes) is the band's too obvious similarities to the other German acts in its family. But if, like myself, one Running Wild might just not be enough...track it down. It's the least impressive of their three albums, but there are some good tunes.