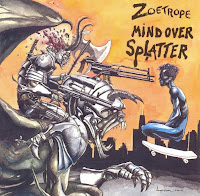 By the 90s, a band like Zoetrope was considered long past dead, and yet, six years beyond A Life of Crime, here was their 3rd album. Mind Over Splatter is one of those albums that struggles to validate its own existence. On the one hand, it's got a few decent tracks that honor the band's legacy and show that they weren't going to go out like suckers...completely. But on the other, it's also got its share of worthless songs, the lineup is almost completely different (only guitarist Kevin Michael remains), and really, the better songs could have been released as bonus tracks on a CD re-issue of one of the prior albums. But alas, Mind Over Splatter was an attempt at a new lease on life for Zoetrope, and with 12 tracks and 40 minutes of new music, it simply did not succeed where it needed to.

I don't know where the train fell off the tracks, or why most of the original lineup crashed and burned, but new vocalist Pete Montswillo does try to maintain a loyalty to Barry Stern's vocal approach. His tone is meatier, and sometimes feels like he's about to lose his breath, but he's not really the issue here. The leads are pretty well written and consistent through the album, and about half the tracks rock out in like an Amnesty revival. Also no problem on the drums and bass, which are just as busy if not busier than the previous albums, which only makes sense after six years of the genre's evolution.

"Crack" is a pretty boring and silly track, though the rhythm is pure Zoetrope and the leads are decent. The vocals sound a little off, and the riffs themselves are not exactly memorable. "Million Ways to Die" is far better, though the catchy leads and a cutting rhythm are superior to the rather dull, plodding thrash of the verse. "New World Order" is like an entirely different band... There is metal here, but the verse sounds like The Police, a proggish leaning that doesn't quite jibe with the rest of the music on the album. And then, the band returns for a number of decent, fun tunes, in "Guilt by Association" and the punishing "Down and Out", though the strange ragga-like Megadeth rhythm at :40 in the latter threw me off for a minute. "It's My Life" operates on a pumping bass line and some corny but fairly catchy melodic guitar lines, and "New York Minute", while riotous, is just not all that memorable.

"Acid Rain" is a pretty good speed metal track with some melodic doom to the bridge at 2:00 minutes, and "Deceased Corpsmen" transforms from a raging rhythm into more twisting, melodic guitars that heighten its immersion. And then..."Splattered" is a fucking rap song. Yes, a rap song, or rather a Zoetrope take on such, with big bass, samples (including Flava Flav), and a guitar solo, which seems rather lame and unnecessary. It's another one of those 'experimental' tracks which bands would toss on their albums because they were afraid of not looking as if they embraced the new diversity and open mindedness of the 90s. LMFAO. The album tries to recover with the grim tones of "Spilling of Blood", and it ends with "Tomorrow It's You", which is hands down one of the best songs on the album, though that is not saying alot.

Surprisingly, Mind Over Splatter has the most raw and underground production of all their albums, and this is a positive. Very earthen, vibrant tones carry the rhythm guitars, while the leads blaze over the top. Though it tries its hand at experimentation, those tunes should have probably been left off the album, and the rest are just not as convincing as the past albums. The parallels to Coven's Boneless Christian are a little uncanny...both released on Red Light records in 1993, after years of no real output, and both coming up far short of the bands' respective 80s work. While, Mind Over Splatter is clearly superior to that Coven offering (Boneless Christian), it's just not good, and I would never reach for it above A Life of Crime or Amnesty, though it may have the best lead guitar of the three.

Highlights: Million Ways to Die, Acid Rain, Tomorrow It's You