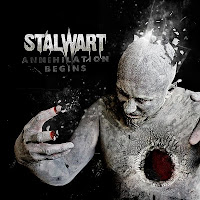 Russian outfit Stalwart have a tight and kinetic sound which crosses the line between thrash and death metal, with a bit of mathematical expertise thrown in for grooves. It's fresh, it's modern, but unlike many of the band's peers worldwide, it's not lame and derivative. It's a bit difficult to make any direct comparison, but think of a band like Strapping Young Lad or Meshuggah cross-bred with the more technical side of Polish death metal ala Lost Soul, Decapitated, or the crazier Vader stuff and you're in the right zone. They also remind me a little of the German band Centaurus-A who released an excellent debut this year, but Annihilation Begins is the 3rd full-length effort from these Russians since they formed a decade ago.

Stalwart seem to have all their bases covered, because not only is the music here well written and often memorable, but the album has a top notch modern sound which, if they catch on, should help them win over a lot of the modern death fandom. Each of the songs is dynamic, progressive and features quality licks and leads, and only a few slack off behind the rest. "Annihilation Begins" opens the album with a blast of energetic riffing, before a teaser black metal riff that alters into a thick groove, while Oleg Sobolevskiy grunts and snarls. The best is when he hits his deeper vocals at 1:20, a voice I wish he would use more often on this record. Not that his other styles are bad, mind ye, just not as original. "Inconsistent" opens with a broken rhythm that winds into a massive groove over double-bass, and "Truth That Kills" is a tense thrasher with some excellent riffs in the verse.

Those are all decent songs, but "Collective Mentality Detune" is the best on the record, with a crazy ass groove that awakened all primal moshing tendencies within me due to its slamming precision. The song feels like Meshuggah and Morbid Angel jamming, and Sobolevskiy brings out some of those cooler vox. An excellent execution, which the remainder of the album cannot quite live up to. Not to say they don't try..."Riding the Edge of Catastrophe" is a great song, and "Casus Belli" comes in a close second place. But even the tracks I'm not covering have quality to offer, just not as tightly condensed in a single song.

Really, if you enjoy modern math/groove metal, death and thrash all without any bias, then this is the type of record you should be tracking down. Stalwart are a skilled band, and though some pricks might cringe at any band who even dares to use 'groove' in their music, we'd all be far better off if the kids were listening to stuff like Stalwart, Mistaken Element and Outcast rather than the shitty mallcore they are currently obsessed with. Annihilation Begins is definitely a worthwhile effort to track down, and it clobbers their previous album.