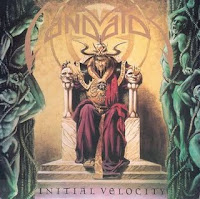 Apparently the Dutch blood and thrash metal blood that run in my veins come from separate parents, because I have rarely associated the two together with anything but the occasional exception (the great Dead Head, for example). Mandator were a speed/thrash act who released an album as Mysto Dysto in 1986, then changed their name for two more to round out the decade. This is a band that escaped much notice, and having listened to both of their works, it is not difficult to tell why. The band seems to be divided here between a harsher, biting thrash sound and the melodic speed metal roots from which they have evolved. And i have to say, the latter wins out on this record, because most of the pure thrash tracks are uninspiring, with nary a good riff in sight.

The production of the album itself is a mixed bag. The bass is thick and loud, and often overpowers the rhythm guitars, which are subdued and stand out only during melodies. That is not to say they are inaudible, and since they are rarely doing much exciting until the frenzied leads, you don't miss out on a lot. Peter Meijering handled the vocals for this debut, and he's got numerous styles, from a biting nasal snear (higher pitched Nasty Savage) to a rather lame scream to some decent cleaner vocals that grace the more speed metal of the tunes.

"Attila" is the inaugural mosh pit anthem here, ranging from a slow, crunchy pit rhythm to a faster paced onslaught ala Exodus or Slayer. Unfortunately, aside from the unhinged lead work there are just no riffs that stood out during the song or after it ended. "Black Rose" is quite a different story, with an opening chug volley akin to Metallica, but suddenly the clean vocals arrive and hit a dual melody that reminded me of Germans Paradox. This is not exactly brimming with great musical moments, but its entertaining and really hits that nostalgic sound, with some nice guitar breaks at 1:20. At the end it turns into a ballad with acoustics and leads, the latter of which are also pretty cool. "Faces of Death" returns to the snearing vocals, a faster track with busy bass. Again, this is not bad per se, but mediocre, at least until the cool guitar melodies around 1:20 (there's that time stamp again!) "Jack Boots and Leather Caps" is a war anthem which begins with some percussion and acoustics, becoming a slower thrash metal anthem with some faster chugs to provide its march-like rhythm. It's not a bad song, and the leads are quite nice.

"Power of the Law" has a nice speed picking intro, with a decent scream from Meijering to herald the oncoming force. Of all the tracks on Initial Velocity, this is perhaps the best balance of their styles, with a forceful German quickness that reminded me of early Rage or Mania. The bass and guitars at 2:30 are great as they descend into one of the leads. "Evil Dead" would seem to be a tribute to the film, or really any case of ghastly visitations, and seems to follow a narrative track, but there just aren't any riffs that stand out as anything more than average, until the lead/melodies. The moshable "Posers" might get me a little more riled up if it was a better song, and "I Will Be Your Last" is a clever closing title, a bluesy tune that transforms into metal, with some rather embarassing vocals that scream far too much ala David Wayne's earlier stuff on Metal Church or The Dark...only not good.

Initial Velocity is just too inconsistent to take seriously. On the one hand, it has the capacity for some more serious fare, and the guitarists Luit de Jong and Marcel Vedurman have some chops when it comes to choosing their lead patterns. But most of the vocals leave much to be desired, and some of the sillier tunes ("Posers", "Attila", "I Will Be Your Last") are void of almost any merits. The speed metal moments are the best on the album, but even then, there would be no reason to reach for this over...say, Scanner's Hypertrace, or Rage's Perfect Man, or many other masterpieces of 1988.