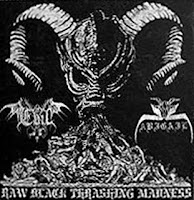 Though their best work tends to appear on their full length albums, where you get more than a mouthful of Abigail's metal load, this is a band who thrives off the many split releases they issue with cult bands the world over, and Raw Black Thrashing Madness, a limited edition 7" released through Genocide Aesthetics, features another of their kickass, liquid hot speed metal tracks smothered in pumping bass rhythms and Suzuki's insanely vile lyrical spew.

"Hammer of Damnation" is truly one of the best tunes I've ever heard from the band, 3:30 of just about everything I admire in the metal genre, a sheer kick to the crotch with no apologies left. As far as I know, you can only get it on this release...an even more convincing case that the band needs to release a new collection with all of this non-album material. Their companions in sin this time out are Evil from Brazil, who perform a ricord of raw, aggressive blackened speed "Iron Tyranny" which matches up pretty well with the Japanese mavens. The riffs are simple, wearing punk influences with pride, and the vocalist Warlord has a great, spiteful echo to his rasp. Like Abigail, this is a prolific band who exists primarily on split releases, of which there are over a dozen by this point.

The value here is more for the vinyl collector than anyone else, but Abigail fans will die for "Hammer of Damnation" and Evil is no slouch in the sack. Fist pumping, spikes and leather for just under 9 minutes, perfect for cocaine highballs and cigarettes and loathing.