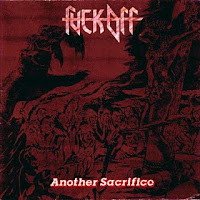 In the annals of thrash metal, it would seem Spaniards Fuck Off have already precluded any criticism of their work by means of the provocative moniker. This was probably wise, because Another Sacrifice is a pretty miserable effort upon which there is no positive light I can cast. I have a high standard for thrash/speed metal, since it has produced the majority of my favorite metal albums. Part of this standard is that I believe bands should maintain an awareness of what is happening around them. Whether by willful ignorance or the exploitation of another record label out to sign every late 80s thrash band in sight to turn a buck, Fuck Off released a debut which was certainly aware of a few little American bands known as Metallica, Anthrax and Megadeth. The problem is that they fail to come up with anything remotely as gripping or catching as those could 3-5 years earlier, and we are left with Another Sacrifice to the gods of mediocrity.

There are a few aspects to this album which do not suck, and these would be the cruising guitar tone and a few of the lead exchanges, as in the track "Maniac" or the descending pattern that opens "The Last Flight". Original Fuck Off vocalist Joe has a weird style which betrays his accent (after all, some of the lyrics are in Spanish) through a nasally, oft annoying tone. This will occasionally border on something catchy (again, the chorus to "Maniac"), without failing to cross. to be brutally honest, it seems like a third of this album was delivered by a band open for business, but the rest is dull and uninspired thrashing by numbers which could not compete with even the 2nd or 3rd tiers of the stuff pouring out of Europe at the time. Spain was surely under-represented during the hi-top street metal era, so the band may have gotten a bit of buzz as a novelty. While waiting between the average leads on the album (which are the best thing you'll find within), you are treated to such substandard pecking as "The Last Flight", the Maiden-bass infusion of "Awaiting Your Death", the quick train to nowhere that is the title track, and the closer "Born to Die", in which the chorus features some hot man on man action.

Normally I develop a natural sympathy for obscure, cult records in the thrash metal genre, but there is some barrier preventing me from even the slightest real praise. At the very best, the album is soddenly plain, and no amount of Slayer covering (the band takes a spin with "Black Magic" here, which only serves to confirm how weak their own riff writing was) can make up for it. No worthwhile riffing. No intensity lashing out from its dusted vinyl visage. No dice. You could randomly pin the tail on the donkey of any European country and come up with a better thrash album in 1988 than Another Sacrifice. In a year with so much creative and talented output, this album barely qualified for the bargain bin.

Highlights: putting the old beast down, so it would not suffer another step.