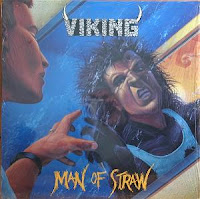 Man of Straw is an interesting album with some clear changes and concessions from the blitz of Viking's debut Do or Die. For one, the production is far superior, with a great clear guitar tone that sounds good even after a few decades. Ron Daniels is also better on this album, though he loses little in the way of his angered edge (perhaps sounding a little closer to Araya here). Daniels had also become a born again Christian, so a lot of the lyrics to this album would quality the band as a Christian thrash act, though not all of them. This can be distracting if you are one to actually sit and read through while you listen, provided you belong to the metal majority that believes Jesus should have nothing to do with certain forms of metal (well, not in a positive, inspiring light).

But really, though I thought some of the lyrics were crap myself, they in no way hinder the real strength of Man of Straw, which is the improved capacity for catchy guitar riffs. Sure, they may not evoke the speedway disaster of Do or Die's endless, storming rhythms, but they stand out through a number of tracks. "White Death" begins with an epic mosh sequence, reminiscent of something Anthrax might write, and it evolves into a Destruction-like, rolling rhythm which makes it one of the most memorable pieces on the album. "They Raped the Land" follows a similar pattern, and "Twilight Fate" offers yet another big mosh/crunch sequence, though it quickly morphs into a faster, thrashing gait. "The Trial" is the most Jesus-centric of the album's compositions, with a fine bass-driven intro and riffs that would not have sounded out of place on an earlier Slayer album. "Case of the Stubborns" is one of the best songs I've heard from Viking, with a catchy stop/start in between its flowing speed metal mutes, melodies, and great breakdowns that will have you tearing up the pit (or your couch, whichever is closest).

"Winter" builds a slowly thrashing rhythm, huge crunch and tone propelling Daniel's vocals, and when it kicks on the speed after the 3:00 mark, you are sucked right back into the style of riff that dominated the debut. The choice to cover Pat Benatar's "Hell is For Children" may seem uncanny on the surface, but Viking do a surprisingly good job with it, and it's more interesting than a lot of metal band covers of other metal bands. "Creative Divorce" is another of Viking's best, with a steady flow of rhythms which recalls their earlier energy, emboldened with the more brazen production of Man of Straw. Good song, and a nice lead-in to the bass-fueled intro to the title track, which also features some strong riffs, like the one that breaks out at 1:40.

Man of Straw was a step forward for this band, whether or not you agree with the appearance of the few Christian-themed lyrics. They still sounded close enough to their peers (Dark Angel, Slayer, Sadus, Hexx, etc) to create a nice overlap of fans, but not too much like any one single band that you'd consider them derivative. Of course, Man of Straw would mark the end for the Californians, so we are left in the dark as to whether lightning could have struck again. But surely there is a great potential here and this is a good album, which has only lost a smidgeon of appeal in the decades since. Fittingly, guitarist Brett Sarachek would go to join Dark Angel for a few years, including the Time Does Not Heal album.