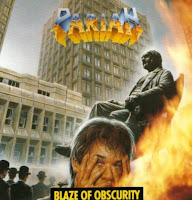 The Kindred may have marked a solid debut for Pariah, but Blaze of Obscurity blows it straight out of port, on charges of failure to deliver the promised amount of product. You will notice a few differences here: Michael Jackson sounds pretty much identical to how Steve Grimmett sounded when he took over Onslaught. Not as harsh or vicious as the previous album, and to be honest, I preferred the vocals there to this. However, the guitar riffs more than compensate, as they draw from few of the technical edged attacks on the debut, and then pummel the listener over and over with brilliant, hammering patterns of notes...so good that when I first heard the album, I had to often stop particular songs just to go back and listen to particular riffs. Yes, Russ Tippins and Steve Ramsey were working overtime in the preparation of this record, and their writing is up there with many of the better technical speed/metal acts of the day...not going as far as Coroner or Deathrow, but certainly better than the majority of the flock. Their power/heavy metal influence only shines, as the solos and riffs can be a little more melodic than the average.

"Missionary of Mercy" is not the best song to open the album, but nonetheless it does. I don't love Jackson's vocals on this all that much, but once you get past the initial thrust of the verse rhythm, the guitars are simply intense. "Puppet Regime" is just mindblowing; the initial riff winds and curves about the fretboard like a shredder on mescalin, and the perky speed licks that frolic below the verse are unbelievable, in a good way. The solos in this track are also quite excellent, and it may just be the best Pariah song in their entire discography. "Canary" comes close though, which more interesting, complex riffs that dance about the beat like a cartoon parody of thrash. An interesting title for a metal song, but it works well when it arrives in the chorus. The title tracks alternates between an emotional acoustic with some of Jackson's 'tender' vocals and a grooving thrash metal rhythm...the vocals don't really work for me during the latter, but there are still a few interesting riffs.

Every hour is dark, life is scarred
with degradation and scathing remarks
pride just chose to hide
leaving you alone with no strength
to carry on, but you carry on

"Retaliate!" brings back the guitar force with an immediately catchy, popping note selection that thrusts straight into the next, with a nice sporadic lead and punctual heaviness to the pre-chorus that breaks into a glorious charging speed metal rhythm and killer chorus. "Hypochondriac" wins out for its wild leads and rhythms, though the verse vocals are pretty lame (they get better at the chorus). The album closes with the scorcher, mid-paced "Enemy Within", which builds to another great lead, and "The Brotherhood", which features some pretty hot, bouncing riffs and a few nice gang chorus bits. The lyrics throughout the album are very typical for thrash at the time, anti-corporate anthems and other social political ideals out in force.

Blaze of Obscurity was a great album, and certainly deserved more attention that it got. But then, this was 1989...many huge bands were just having their careers hit the upswing, and Pariah were not coming out of a popular background with Satan. I don't love the vocals here, they drag it down a notch in quality...though Jackson still delivers when he breaks away from the Grimmett style. But it's a must listen for fans of great 80s guitar work in thrash and speed metal, with some rhythms that still sound fresh 20 years after the fact.