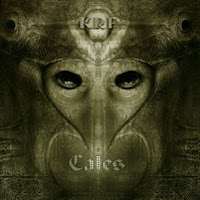 I should state that even though I did not completely love the 5th full-length effort from Czechs Cales, there is a certain balls out fervor to their style of Celtic folk/pagan doom that should take anyone straight to a dip in the Guiness, and I can envision no situation in which any human being would listen to this album and not have at least a little fun. It rocks, it rolls, it thunders and crashes like a man wearing a kilt on a boxing spree, and it asks that you only grab a drink and have a good time. And at times, it exceeds even this level of immersion to create moments that transcend its barbaric pagan bombast.

"Barbarian Paganus" is a rowsing drinkhall anthem which swaggers with the inevitable violence of a rumble over women and booze, but it romps along with a pretty harmless pace and expected folkish tint to the guitars. "Varjag" goes far beyond this, a swelling climax of huge rhythms and melodic tones that smack together like waves on a turbulent sea. This is an intense track, and had the entire album shared its desperation and beauty, we would have a classic on our hands. I loved Skuny's vocals on this, snarling like a constipated man trying to find his newspaper on the front lawn, with his drawers down. "Resolution" thrashes out with a great, winding rhythm that offsets intense chords and percussion, and it's nearly as good as "Varjag". "Pass in Time" and "Song of Outlaws" are far more along the lines of traditional folk metal, only with the Celtic edge as opposed to similar bands that use Finnish, Russian, German, Polish aesthetics, and so forth. "Legacy of Honour" has its moments, and "Savage Blood" staggers along a trail of warfare before "Magnificent Masterpiece of Apocalypse" puts you deep in your cups at the pugs.

Most of what Cales have conceived on the album is decent, and it all sounds quite bright and loud, but a few of the songs here really stand out (in particular "Varjag"). Two songs deep, I was thinking this album could be a true contender, but as the album moved along, I was a little disappointed. Still, KRF sounds really good, it does not often sound like a cut and paste from another folk metal album, and if you enjoy tales of Celtic and pre-Celt barbarism and lore, then go ahead and rock it.