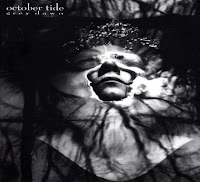 Walking in the footfalls of the excellent Rain Without End is certainly a path well outside the park, and as their swan song, October Tide's sophomore effort was a mild disappointment. That isn't to say it's bad, or without merits of its own, for the musical performance on the disc is almost worthy of its predecessor. The major difference here, is that the vocals were turned over to Mårten Hansen of A Canorous Quintent (also Sins of Omission), and though I won't say he's got a bad tone, I just didn't enjoy his melodeath leanings as much as I did Renkse's deeper growling doom thrusts of the debut. It seems as if something so beautiful and painful was replaced by a rather phoned in alternative to those same emotions.

Otherwise, the band is the same here. The big melodies have been crafted into some more progressive patterns, perhaps a parallel to the changes that Renkse and Norrman were making in their main band. The drums are actually a little more powerful, but still simplistic, and where the band departs from the pure metal, they still excel. But having Hansen here sort of feels like ordering a burger or hot dog, then finding the wrong condiment was placed upon it, and tasting it anyway...

"Grey Dawn" is an interesting bit, with a strong doom opening, and a very Edge of Sanity-like melodic death riff after thirty seconds; but eventually winding down into a period of tranquil bass plodding, light drums, and chords alongside a warped, conversation sample that hangs at the edge of perception. It's a decent track, though the vocals are mediocre. "October Insight" has some chug and doom, for a few seconds sounding like something Katatonia might pull on a more modern record. The vocals here are grunted low and behind the vibrant melody, and they fit better than the first track, until the melodic charge part... "Sweetness Dies" has some excellent rolling melodies that would have fit perfect on the debut album, and later comes an almost psychedelic break where chorused guitars simmer alongside a lumbering doom melody. "Heart of the Dead" has a lurching, forward momentum, with some nice melody lines that wander blissfully across the open spaces between chords. But alas, the vocals.

"Floating" is another of the tracks worthy of Rain Without End...had ONLY Renkse decided to use his vocals here, for there are some truly evocative, somber passages, where the chords stop and an evil guitar line rings out. "Lost in the Dark (and Then Gone)" has a sense of depth and urgency to its riffing, with a sweet and sad dual melody in the bridge. "Into Deep Sleep" has some strong riffs in the beginning, though it gets a little dull during the faster section, and the album closes with the acoustic piece "Dear Sun", which does not disappoint, though it seems like something tacked on to give the album another track and could have been used anonymously on any of Renkse's records.

In short, this album was acceptable enough for what it was, but fails to generate the nostalgia that surrounds its elder sibling. There is good music to be found here, but you have to sift through the average vocal performance, and the mix of the album is not quite so devout or honest as Rain Without End, but somehow subdued. If you're tracking down this band for the first time, you might not want to start here, as it could turn you off.

Highlights: Grey Dawn, Sweetness Dies, Lost in the Dark (and Then Gone)