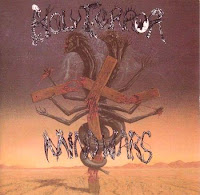 As far as sophomore albums go, Mind Wars seemed a bit of an odd duck when it released. The music is largely the same pace as Terror and Submission, jet fueled trash with dense riffing that hints at some technicality. But the album's tone feels a little tighter, and Keith Deen becomes a little more unusual with his vocals. A needle-sharp, nasally clean voice permeates most of the album, which makes for an interesting contrast against the battering rhythms. He'll shift from these cleans into the grittier style that dominated the debut, and often even lower into a death-like voice. Where the previous album felt like a road race through hell, this is more like a bull run, or rodeo.

"Judas Reward" has a crunchy, warlike opening rhythm behind some brief shred, before the band begins a frenzied gallop and Deen's vocals begin their varied musings. The bridge riff here is powerful and speedy, like the matador whose life flashes before his eyes as that gate opens. "Debt of Pain" goes supersonic early with an amazing riff sprint, and the chords over the bridge shine alongside the quickly darting melodic vocals. A great song, with great leads, but it's over pretty quickly, and "The Immoral Wasteland" takes control with start leads, breaking into a very Maiden trot with some excellent chords, and a memorable chorus. "A Fool's Gold/Terminal Humour/Mind Wars" is an interesting 3 parter, posing a three-headed question about Christian upgrinding and morals. The lyrics for each part seem to reflect a separate perspective, yet together they create a before-during-after perspective. The music here is mixed, with a few striking riffs but also some I could live without.

"Damned by Judges" continues the religious theme, with some samples of a court room and frothing load of barbaric speed metal, with just as much in common with power as thrash. The interplay of the lead guitars around 2:45 is excellent, and more arrive near the climax of the track. "Do Unto Others" escalates from strolling drums and vibrant, thrashing riffs to another hyperactive thrust of West Coast speed; while "No Resurrection" opens with one of my favorite riffs by the band, and Deen starts soaring over the mix with an open howl. Once more, the frenetic leads deliver another moment of caustic indulgence. The album ends on another strong note, with the rodeo-like frenzy of "Christian Resistance". Maniacal leads, acrobatic verse rhythm and an explosive riff at 2:00 which had me reeling in my seat, as Deen snarls over it like some sinister proto-black metal deity.

Mind Wars is very nearly as good as its predecessor. Technically speaking, it is superior, as the guitars have taken their razor chops to a new extreme, with bewildering solos and more speed than a med school before the night before finals. It arrived in a year overflowing with genius, and yet it still holds its ground over two days later. They don't make thrash metal records like this these days, at least not often, and Holy Terror are yet another hidden treasure of the past that warrant your attention. Looking to have your ass kicked and your faulty religious ideals questioned? Apply within.