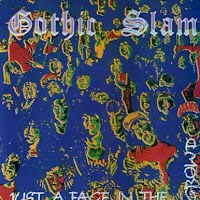 Perhaps the title of Gothic Slam's sophomore effort was an apt analysis of their position within the metal industry, for the band did not reap much success from their debut and it probably became clear that thrash metal was on overpopulated mess, with record labels snapping up anyone with a pair of combat boots and a Not Man t-shirt into a 1-2 album deal. But Just a Face in the Crowd was a strong attempt to sharpen up the band's riffing chops and build catchier tracks, a success that is burdened by a few resounding flaws. Jaded fans of the first album may not develop an attraction for the more polished studio production here, and to be honest it does feel a little sterile compared to the brickhouse bombast of Killer Instinct. But the writing is simply superior.

Now, when I brought up the 'flaws' of the album, I was mostly referring to the fact that almost ever song on this album has lyrics like a public service announcement. Songs about domestic abuse and standing up for your right to be different are no novelty in the realm of thrash metal, but it's just the delivery of the lyrics here that makes them feel quite dated and cheesy. Especially when they are delivered through the more emotional performance of Daniel Gomez here, who adds a lot of rock inflection to the vocals (akin to Leeway). When he screams lines like 'What the hell is going on in society today?' I almost break down with laughter. But, if you can survive this minor roadblock (which, sadly, permeates much of the album), the rest is pretty good. The riffs are like a crooked cop out on the beat in New Jersey, one of the biggest shitholes you'll ever find here in the suburbs of Hell, as he stalks and bludgeons everyone to death with his nightstick.

In the classic tradition of bands like S.O.D., the album begins with a brief mosh-strumental in "Why not?", which was custom built to flow directly into the opening chords of the band's most memorable anthem, "Who Died and Made You God?". This is the type of cheesy and infectious 80s thrash track that I simply could not forget, even if I tried. It's just that catchy, with a great breakdown chorus, gang vocals and a byline that ranked with some of Nuclear Assault or Anthrax's hits. The kind of byline you could shout at your boss, your parents, your school teacher, your lawyer, or even that snotty metal critic at From the Dust Returned who is always pissing in your fairy metal cornflakes. It is unfortunate, then, that the following track "Battered Youth" is the low point of the album, with PSA lyrics that are wholly laughable, and a little too much of that hard rock spin in the vocals. When the pitch-shifted vocals arrive at 3:10, I sprayed my dinner half way across the room, I started laughing so hard.

How do Gothic Slam recover from this abortion on tape? Well, an average cover of Thin Lizzy's "Thunder & Lightning" attempts to smack the taste out of your mouth, and "Feel the Pain" begs to ask if you can feel the pain in Gomez' heart, but "Cry Freedom" finally delivers another kickass track, almost as good as "Who Died and Made You God?". A good, classic Maiden-esque descending guitar melody stirs the pot, and then a catchy verse rhythm adds the meat into the stew, with a killer bridge and quality solo section to boot. "Violence Imprisoned" is another strong track with a stomping rhythm behind the crazy awesome leads, and "Keep the Faith" delivers even more ballbusting guitar glory. For "Demented Obsession", they kick it off with a mournful rock ballad, Gomez stretching out his chords, and the guitarists finally stretching out theirs when the metal kicks in at 1:30. "Contract Killer" is another street ready anthem with some decent riffs to it, though not one of the better pieces here.

Just a Face in the Crowd is clearly an evolution from the band's debut, in all the right ways. The riffing has become more advanced, with plenty for the Metallica or Anthrax fan of the day to break his neck to. "Battered Youth" is an awkward track, "Feel the Pain" is skippable and the Thin Lizzy cover is hit or miss, but the rest of this album is solid street thrash which could have likely satisfied a lot of the hardcore/metal crossover crowd in the day. Recommended if you've always sought another dose of that pure NY sound.

Highlights: Who Died and Made You God?, Cry for Freedom, Violence Imprisoned