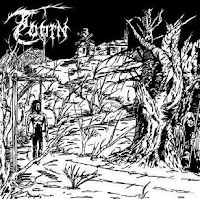 Toorn is another of those ambitious one-man black metal offerings, this time from Cerulean, guitarist for Belgian black/sludge band Kludde. While his work there is alright, I was really overwhelmed by the sounds here, a spacious and melodic album which is over an hour long despite having six tracks. Yes, this consists of a number of 'epic' compositions which surpass the 11 minute mark, but Cerulean has written enough subtle texture into the repetition that each feels like a journey, a journey upon which I was more than willing to depart. He does all the instruments here, though has other members for live performances, and the drum machine is programmed well enough that it doesn't intrude upon the thick, glorious streams of guitars. I'll be honest, there were moments I simply could not tell.

"Galgenburg" itself creates a lush ambient atmosphere before a series of powerful, if simple riffs that drive forward for much of the next 10 minutes, breaking only for a scene of somber solitude, glimmering acoustics and a reversion to the turbulent, beautiful guitars. "De Ondergang" is another track at almost 12 minutes, with some great guitar rhythms up front, but I really enjoyed where it breaks down into a primal percussive pattern with descending, melodic guitar lines and whispers at around 2:30. "Hoop" has some more of the sorrowful, melodic leanings, with huge vocals in the bridge that elapse into snarling over the further, mid-period Katatonia pulse of its rhythm. "Het laatste Oordeel" creates a nice, dreary dual melody before its own entrance into the driving mid-paced rhythm, another 12 minute tapestry of sadness and bleak landscapes. At under 5 minutes, "Paria" is the baby of this record, but one of the heaviest tracks, which a lot of chugging thunder below its sad veneer. Possibly the best track of the six. The album ends with its lengthiest composition, "Memento Mori", 15+ minutes of tranquillity in acoustics, black and doom segues and bombastic, tribal percussion.

Galgenburg is a great debut...for a project I hope will continue. It's going to have the greatest appeal to fans of that style of Katatonia meets bedroom black metal which is more common than you'd think. The melodies are sound, the mix of the record is great, and it's another strong offering for a rainy day or a grim travail through the woodlands of autumn or winter.