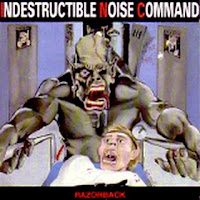 I.N.C., also known as Indestructible Noise Command, are one of the few Connecticut metal bands to ever make a name for themselves, though not a name to be spoken as loud as Liege Lord, or even a fraction as loud as Fates Warning. They also are responsible for two of the worst examples of cover art to appear during the thrash explosion of the 80s, and for this they must be hunted down and reprimanded, for I do believe they have shaken off responsibility to this day. Razorback was their debut, and unlike those other, better known kinetic-cunt bands, I.N.C. played an egregious brand of thrash metal. But a sense for dynamic, fairly unique riffing, and a humorous, dorky flavor helped land them a deal with Giant records.

This is not the better of their two albums, and the quality does feel inconsistent; but there are still quite a few memorable moments driven home by the twin, chugging axe mayhem. Yes, I.N.C. had one of the thicker, punchier guitar tones of the day, and they have a tendency to make the material sound fresh, even today. Erik Barath and Tony Fabrizi used bands like Metallica and Anthrax as a base, then got rather playful, with some cutting lead work and an infestation of 'fun' into every rhythm, like fleas that have found an oasis in your armpits. Dennis Gergely has a bipolar vocal range, which bounces from a laissez-faire tone to a sharp, nasal aggression. I can forgive him this, as he is also playing the bass and doing a decent job, not afraid to offset the guitars with a fill here or a popping there. Drummer Gary Duguay anchors the quartet with some solid, energetic skin bashing.

Like most thrash bands, a song title featuring your own namesake was mandatory, and "Indestructible Noise Command" christens the debut with over 8 minutes of frivolous, chunky thrash. The riffs tend towards quality, though I feel a few moments could have been shorn off for a more consistent experience. Likewise, "The Grip of Death" also runs for too long, almost 8 minutes itself, and there are simply not enough good riffs to support its framework, nor even a song half the length. You get an S.O.D. mosh slugfest and a cool thrust behind the leads late in the song, otherwise it's one of the worst on the album. "War Not Words" is an improvement, trotting along with some fun rhythms straight from the Master of Puppets school, though Gergely does not sound enthusiastic enough in the chorus. But at least it's shorter and tighter fare. "Anarchy (The Pursuit of Happiness)" has a pretty fanciful melodic rhythm after :30 which showcases the band's creativity within the thrash realm, and some good leads, though once more the vocals could be better.

At this point, I.N.C. revisits the epic song structure, with title track "Razorback". But unlike its predecessors, the 7+ minutes of the song does not feature much in the way of filler. A tight song throughout, with lyrics celebrating the bad horror movies of the 80s, but if I had one complaint it would again be that the lyrics sound rather bored these many years later. "Fists of the Mighty" is another briefer cut with some puncturing riffs that belong on Master of Puppets' little sister, and "Fear" is your typical anti-pollution anthem, though there is some good bass in this one and some interesting if inconsistent riff quality. The band saves the best for last, as the melodic mutes of "Passageway to Purgatory" lead into some excellent momentum, and the lead flurries kick some serious ass as they flutter above the best rhythm guitar work on the album.

Razorback shows that I.N.C. could have been a contender, if not for a few glaring flaws. The vocal performance is average at best, and 'blah' for the remainder of the album. This may have a lot to do with his bass playing, which is rock solid, so they didn't want to mislead you as to how the live performances were going to sound...but a better foot forward in this department would have drastically improved the album quality. The lyrics are not as silly here as on the follow-up The Visitor, or it might have been worse. The writing for the guitars is very positive throughout, though a few of the earlier songs could have done with an edit in length. Not a bad album for nostalgic purposes, or for moshing in your bedroom with a beer.

Highlights: Razorback, Fists of the Mighty, Passageway to Purgatory