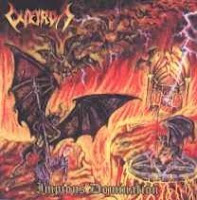 Impious Domination was the debut of Brazilian death cult Queiron, arriving in 2002 after about 7 years worth of demos and songwriting. It's a rather crude effort, though it's not lacking in the extremity department, and I would make comparisons to a band like their countrymen Krisiun, who also once played in a very sterile, fast forward manner which rarely ended up going anywhere. This, alas, is the real flaw found within Impious Domination. It's heavy as fuck, fast and the drums are constantly moving, but the songs really do nothing of importance...they simply feel like finger, hand and foot exercises with Marcelo Brutallik Grous deep growls scorching over the top like hellfire.

Granted, these riff exercises are formed into patterns, which roughly comprise songs, but even at their most evil they do not deliver a compelling death metal experience. It's as if they've got the basics of Deicide, Morbid Angel, Krisiun and death-Behemoth down but don't really do much else with them. One notable aspect of this record is how the bass is so loud and grooving alongside the dense guitar tone, it feels like the two are racing off in a speed zone, and fast they are, so thick and central that they often leave the drumming in the dust (though the drummer is equally adept, this is more a fault of the mix). Across this, the vocals, while placed in solid time slots through the songs, feel like nothing more than a peppering, a condiment of slaughter.

It's difficult to comb through this album to pick out favorites, since there aren't any songs that I truly enjoy. "Eternal Suffocation" is so frantic and brutal simultaneously that it almost sounds like a happy death metal song. The nearly six minute instrumental "Vemi et Vici" doesn't detract a whole lot from the vocal works, only that it's got a little more bewildering guitar shred. However, it does have a pretty nice Slayer-esque riff in there that may have sounded great with Grous' vocals atop it. "You'd Better Light a Candle..." has a good title, and some nice leads and patterns in the latter half. It's the same with "Blind Devouts", some good melodies and leads are scattered here or there.

The lyrics do seem to struggle a little with English, but this is never really a problem for me (in fact, I often enjoy it, even here). Like Deicide and their ilk, Queiron are really into abstractions in the realm of the occult, ritual, Satanism, anti-Christian ethos and all the associated imagery. It's old hat but the Brazilians are at least capable of conjuring some good, diabolic imagery. If only the music could support it a little better. The production here does not help much, as it just feels like a hellish highway race through each track and few moments stand out (aside from the leads).

As down as I may seem on the record, it's really not all that bad. It just never establishes a connection to the listener which begs for repeated listens. Of the three Queiron full-lengths, I would consider this the worst.

Highlights: the sound of crickets?!

Verdict: Indifference [5.5/10] (a blessing in front of illusions)