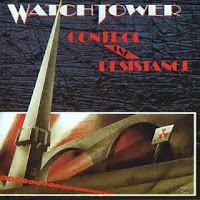 Control and Resistance is not only one of the very best progressive thrash metal albums ever created, but it's yet another example of how Noise Records had almost cornered the market on all things metal of quality in the late 80s. This album exceeds Energetic Disassembly on all fronts, both for its better use of dynamics and insane level of immersion which can actually transport the listener into the various scenarios it presents through the lyrics and music of each track. This was by no means an album I could digest all at once; it must have taken me a dozen listens before all of its intricacies converged upon me like a lattice of pulsing, electronic information.

Judging from the vastly superior songwriting, it's clear some changes have been made in the years since the debut. Alan Tecchio has taken on the vocal duties here, and while he does not distance himself greatly from the style of McMaster, he is simply better at managing the task at hand. He can shriek like a harpy with the best of them, yet he restrains himself so he never becomes some awkward component of the instrumentation. But an even more profound improvement has been made in the guitar department, where Ron Jarzombek has taken over the position of Billy White. Jarzombek is sheer insanity on this release, a monster of ideas and quality riffing that had guitar maniacs' heads spinning when the album dropped. A wealth of leads and speed picked thrash rhythms conjoin to create an atmosphere through the notation alone. The rhythm section of Keyser and Colaluca remain, and both have also tightened their performances; to stunning results. Keyser has crafted himself one of most technically satisfying applications of the bass guitar in the history of metal music, not only complementing Jarzombek's witticisms but becoming an equal. Colaluca has perfected his mix of jamming fusion and electronic fills into something one rarely heard outside of the stricter, progressive rock/fusion circles.

But, musicianship aside, even if we were to assume aliens landed on our planet for a few weeks to record this album, each with dual concentric brains and six limbs, it is the music itself which launches Control and Resistance into the stratosphere. There are so many individual riffs on this album that I must have spent hours stopping and rewinding my original cassette version to try and comprehend what was going on. And yet, the riffs are never so indulgent that they strand the thematic nature of each track outside of its performance. "Instruments of Random Murder" arrives in a wash of adventurous guitars, plopping bass and shuffling drum work that at once immerses the listener while warning him/her (oh who am I kidding, how many girls listened to this record?) that THE GAME IS AFOOT. As it begins to thrash out of control, like the section at 1:15, you can actually feel the hysteria and panic of a murder, an autopsy, and a brain being wracked to find the answers. "The Eldritch" is fast and dangerous, with more intense thrashing that threatens to explode out of the seams. The little tapping lead is beautiful, and Tecchio's vocals fit like an escaped madman over the amazing flow of the verse...and yet it's the speed rhythm at 1:10 that ensures you will NEVER forget it. "Mayday in Kiev" has some of the best bass playing I've yet heard on any progressive metal composition, and this is one of those tunes that truly sucks you into the post-nuclear disaster landscape, a smorgasboard of excellent riffing.

That happened! And now, YOU CAN BE THERE. The opening salvo of "The Fall of Reason" has a lot of bite as it proceeds into a scintillating sequence of clinical, punctual melodic thrashing sequences. Eight minutes in length without even the remotest trace of boredom. "Control and Resistance" is another jarring composition with fantastic bass and intense spurts of mechanical thrashwork, Tecchio reaching desperate heights as his throat glares through the madness of social ineptitude and mass conformity. "Hidden Cycles" thinks outside the box functional, terminal rhythms and percussion that make Fates Warning and Dream Theater of the period seem childish by comparison. "Life Cycles" has some interesting, clean tones that evoke a psychedelic mystique (modern Cynic reminds me of this song), but the bass storms and the track soon evolves into another thrashterpiece. "Dangerous Toy" may be some offhand reference to previous vocalist Jason McMaster's new gig with the lame hard rock band, or perhaps it was penned by McMaster himself, yet it's another strong Watchtower tune here with some circular, bouncing rhythms and entropic bass-guitar interplay.

Control and Resistance is incredible...a work of brilliance which far exceeds many similar attempts in the decades since. Bands like Psychotic Waltz or Spiral Architect have tried, but only scratched the surface of what Watchtower had already accomplished two decades ago. Atheist and Cynic haven't even come close. 1989 was a banner year for technical metal (Deathrow's Deception Ignored and Coroner's No More Color are two other examples that I enjoyed even more than this, if you can believe it), and yet this sophomore effort remains fairly timeless, despite its often dated production. And this is perhaps the only minor complaint I hold for Control and Resistance. The guitar tones are often a little thin for my tastes. When they are sharing space with the transcendental lead work, I can give it a pass, but just an inkling more power would have processed perfection. But, really, if you think this is going to be a distraction, you think wrong...because this album is a monument of possibilities, regardless.

Lowlights: You and I will never be this good. Ever.