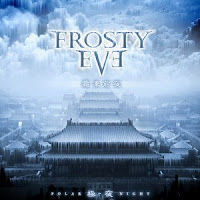 More new metal has arrived from China, and yet again it shows an ability to take the influences it has consumed, repackage them and spit them back out with a strong young voice. Up to this point, much of what I've heard from the The Middle Kingdom has been of the blacker variety, but Frosty Eve are a full on melodic death metal band with a huge influence from bands like Children of Bodom, Norther and Omnium Gatherum, along with a little power metal, and just enough of that modern pit chug to their style to satisfy the crowds, without going overboard into stupid redundant breakdowns. Polar Night is an incredibly solid debut album, followign up an EP that the band released in 2007. Your appreciation of the style will really depend on how you view those Finnish bands, for a lot of piano and keyboard occupy these compositions. To the band's credit, they never overpower the guitars, which are consistently writing engaging enough riffs that you find your attention divided (in a good way).

A totally great New Age sounding keyboard intro kicks off this polar night, and then the metallic power of their namesake "Frosty Eve" erupts with a charging melodic rhythm, death grunts and synths which carefully choose the right moment to strike. The thrashing verse rhythm is quite nice, while Zhenzong barks across it like the bastard love child of Alexi Laiho and Tomas Lindberg. "Dying Dreamland" has yet another charge, seasoned in the complementary melodies of the guitar and keyboard. I like how the muted melodies here break into the great bridge rhythm at about 2:00, and the next track "Assassin Compact" opens with a Soilwork-style brick groove before some more of the band's playful melodic interplay. The clean vocals in the song are actually quite somber, if poppy, and the throwdown rock rhythm hits at just the right moment. And it's far from over, because "Evil in Mind", "Companion of the Doom", and "The Endless Battle" (with a little fun percussion in there) all deliver some fine, memorable riffing.

Polar Night is crisp and clean like most modern albums with a progressive flair. I will reiterate that Frosty Eve is NOT a band you will enjoy unless you partake in modern European melodeath with an emphasis on the keyboard player. This is not original, but like most albums hailing from Asian countries that have only recently begun to develop into the metal scene, it seems to successfully break down the elements of its genre into the bare essentials, then re-construct them into a pattern ever so slightly deviant from the influences. It's not brutal, it's not insanely complicated, and it's no mind blowing conceptual work of art. Just a catchy record that was pleasing on the ears, despite any flaws.