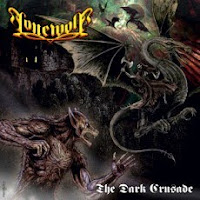 When you think of French power and speed metal, not a lot comes to mind out there. Heavenly, but they've got more of a flowery Helloween style; long time veterans Nightmare; or if you reach really far back, you had some pretty great bands like Blaspheme or Sortilège. But in the here and now, where do you turn? The answer is short: Lonewolf. The band has been plugging away for quite some years, formed in 1991 but breaking up after a few demos, then reforming and becoming more productive than ever. The Dark Crusade is their 4th full-length, and the band have been making steady strides on each.

Their sound hovers somewhere between Germans Running Wild and Grave Digger, a fully guitar-driven band with deep, crumbling vocals that are like Chris Boltendahl if he received a testosterone injection. The riffs have that sort of relentless Rock'n'Rolf picking style, streams of melodies that could just as simply cast one's memory back to times of history, both real and imagined, but ever glorious and spiked like a gauntlet. They stick to a similar pattern for several of the songs, yet it works, and you likely won't want it to change if you're a fan of either of their primary influences. Jens Börner's simply have to be experienced, though they do feel corny because of their garbled edge, it's not a bad kind of corny, but an endearing trait that makes the album even more memorable than it might be otherwise.

"Dragons of the Night" is a sweeping gothic intro with organ which surges into the leading melody of "Viktoria", which the band repeats perhaps a few measures too long before Börner's vocals stomp through the mix like a giant radioactive lizard tramping an East Asian metropolis. "Legacy of the Wild" reaps even more of the band's cheesy monster movie concept, with another riff that sounds like it would have been right at home on Blazon Stone or Black Hand Inn, save the thicker vocals. "The Dark Crusade" is faster still and grimier, but still infused with the bands pulse pounding energy, enthusiastic leads and gothic horror. "Hail Victory" opens with swords clashing and men scuffling, before the dual lead works its way above the march-like drum rhythms and the band breaks into another of their pirate-like rhythms applied into a different setting and context. This is all good, but the album gets even BETTER as it proceeds, with the kickass, stomping "Warrior Priest"; "The Wolf Division", which sounds as if Stormwarrior holed up from a Northe Sea voyage into a castle and dungeon; "Heathen Horde", which yet again feels like something Rock'n'Rolf would write; and the flighty "Winter Farewell" with its great melodies. Really, the only song I didn't outright love was the swaggering "Words of the Witch", and even that was fun.

The Dark Crusade is hellish fun, especially if you enjoy the abovementioned power metal acts, or something like Paragon or Iron Savior. The classic monster/horror scheme has been done by many bands already, like Iced Earth or The Vision Bleak, but none that really sound this true to the great German style. This is power metal with actual power, you won't find female vocals lousing up the songs or an excess use of sparkly little keyboards, with the exception of intros. This is all meant to reproduce into a live setting and have you smashing your mailed fists against the stage and your own skull. Hilariously awesome.

Highlights: best served with something cold and German.