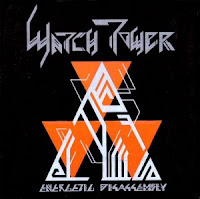 Watchtower were an impressive technical thrash band for their day, one of the few that could actually be labeled 'progressive' in the 80s field without much dissent. Though it was the less refined of their two full length efforts, you can imagine Energetic Disassembly was something of an anomaly for a year in which bands like Slayer, Anthrax and Possessed were still cutting their teeth. Even the arguable progressive metal contemporaries Fates Warning were still exploring their traditional metal phase at this point, so this album is simply far out there, thinking ahead of the pack.

Having praised its distinct nature, then, I must say that I really do not enjoy this debut entirely. For all its shrieking eccentricity, it often fails to immerse me or conjure up the masterful compositional skill of its successor. It's almost a drag to listen through, knowing that there are very few riffs here that catch my attention beyond their oddness and the obvious wealth of idea that went into them. Most of the tracks jerk and meander about without delivering so much as a compelling melody, and Jason McMaster's vocals range between intense heights and awkward foolishness. This is one of the albums in my collection which has actually grown more tiresome with each successive listen, but there is still enough here to appeal to that very small niche of the progressive thrash fan.

"Violent Change" starts with a few jarring riffs that groove alongside the drums of Rick Colaluca, while McMaster lets loose too quickly. The only part of the song I actually enjoyed is the driving bass and leadwork after 2:00, though McMaster emits a few cool shrieks later in the track and the thrashing begins to foreshadow Control and Resistance's tighter mechanism. "Asylum" does work it for awhile, as the drums and Doug Keyser's bass pop and shuffle through a nightmare scenario scored in shrieking; the lead here is also pretty intense, but the remainder of the riffs passed through me as if I wasn't even there. "Tyrants in Distress" has a more traditional metal edge to it, not unlike Helstar, and "Social Fears" a few decent, shrill warnings where the vocals join the deep thrashing of the verse.

And then follows the title track, which is a decent listen if only for the oodles of bass that anchor its progressive arrangement of thrashing fusion. "Argonne Forest" begin with some stop/start bass-driven pounding that flows into a chaotic verse thanks to McMaster's freakish presence, and there is a decent lead line. "Cimmerian Shadows" does a reasonable job of building mystique into a more traditional, melodic speed metal riff, and the closer "Meltdown" is possibly the most old school metal track on the album; aside from a few of the guitar chops, this could simply be a jammy, intense NWOBHM band.

The mix of the album feels a little sloppy to me, with the popping bass, siren-like wailing, crunchy guitars and the electronic drum fills that often bust through. But at least you can hear everything. The lyrics are suitably centered on the dynamics of both social injustices and their scientific application to the human psyche, with a slight not to fantasy, but they are quite well written and remain as interesting as the better riffs. At a few points, where the mix comes together, the album really does excel, and the reach does not exceed the grasp. Certainly it deserves mention for its novelty, and ambition, but I'd take their second album over this.