Sacrilege - Beyond the Realms of Madness (1985) 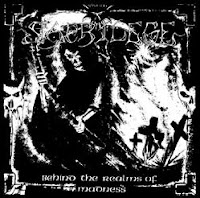 England's Sacrilege were a fairly interesting band that sadly fell under the radars of many metal fans in the 80s. Notable for being one of the few British metal bands with a good female singer, they also made an interesting transition through their three albums, from an early crossover of speed/thrash with a steady punk influence, to a very laid back, unique brand of thrash/doom metal. Here on Beyond the Realms of Madness, the band played fast and filthy with a huge hardcore/punk influence, and combined with Tam Simpson's aggressive voice they felt like a hybrid of Znöwhite and Discharge. This debut was only 26 minutes long, with six tracks, but it provided more than enough energy for fist mashing and burning off your body fat in youthful anger, and I certainly recommend it to anyone seeking out old school punk, thrash, crossover, hardcore, you name it!

"Life Line" opens with a resounding ambient tone before the frothy pistons of its punk edge begin to hammer forward. In particular I love the second riff, a speed metal flurry that is easily the rival of bands like Acid, Détente, Holy Moses, or other female fronted classics. The track doesn't let up for 4 minutes, and the slower "Shadow from Mordor", which, in a strange maneuver, instantly removes you from the street and takes you into a fantasy metal realm, with evocative solos that lead into a faster paced, steady rocking rhythm worth tossing in any spiked gauntlet. "At Death's Door" is mean but not lean, 5 minutes of crushing metal which yet again fills out the punk roots into a pissed off metal angst. The extended breakdown at about 2:00 here is pretty great, with a trace of doom like progression as it pummels you repeatedly.

The lyrics are fairly political, even "Shadow from Mordor", which again honors the thrash and hardcore tradition. "A Violation of Something Sacred" is another heavily punk-driven tune spitting more fumes than a rusted engine, and Tam's shouts likely had circle pits a-brewing and mohawks shaking in pubs all over the UK. "The Closing Irony" opens with the intonations of bells, and then a mid paced dirty thrashing riff and some swell leads. This is my single favorite song of the album, and I like that the bells return to sound off like a crunching pendulum. "Out of Sight Out of Mind" has some excellent, churning speed metal rhythms which sound like a napalm barnstorming, as it spits another round of core-fueled aesthetics and mosh-downs to top off the album.

One of the reasons I occasionally listen back to Beyond the Realms of Madness is the excellent tone of the album. It's raw and pissed off, no excess studio wash-job, and it has so much of that edge which modern hardcore and punk (and thrash) can rarely emulate in their endless fashion parade. This is a bruiser of an album, so if you have only heard Turn Back Trilobite and you're listening for the first time, you may be surprised, there is not a lot in common except for the same musicians. That being said, it's a little hard to compare to their later work, which evolves away from this sound. The Sacrilege of 1985 was almost a separate band entirely, but a good one, and if you like a mix-up of Discharge punk rhythms and Holy Moses speed metal, then I urge you to track it the debut down.

Highlights: Life Line, At Death's Door, The Closing Irony, Out of Sight Out of Mind

Yeah, this album is pretty rad.