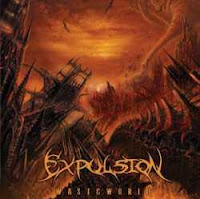 Because hearing one great new Dutch death metal record in a week was not enough, I present to you the full-length from Expulsion. This is a fast, fast band, who hitch explosive thrash metal bumpers onto their grisly roller coaster of writhing, spastic death. Their style feels a lot like the energetic Swedish melodic death of a band like At the Gates, Terror 2000 or the more frenetic tracks of The Haunted, injected with a hyperactive desperation, as if the world is about to end over and over again, and Expulsion has a lot that they want to get off their chests first!

You are first given a swelling, brief guitar instrumental before the band just nails you in the face with a powerful trio of "Land of Empty Graves", "Neoconomicon" (hahaha), and "End of Days", the latter of which is a thrashing eruption that could probably power most vehicles if its energy could be contained. I have rarely heard such spastic lambasting outside of the faster tracks from Darkane, Dimension Zero or Terror 2000, and yet even here the band has some great riffs like the dizzying bends after the 1:00 mark. I'd advise you take a breather after these, because "Martyr" is only mildly more forgiving, and "Messianic Shadows" slows down to a battlefield crawl before its great initial leads and savage thrust. There are plenty of quality offerings to compose the remainder of this debut, including the jumpy "Promise Never Made" and the storming onslaught of "Spirit Emission".

If there is any weakness to Expulsion, well, perhaps they just move too quickly too often. They do this with riffing fortitude, mind you, but a little bit of an additional dynamic shift here or there would not harm their writing. Like a testosterone rush, these songs can leave you in the dust feeling tired and less appreciative after the fact. Not to say that the album flies past for 100% of the playlength, but just enough that you can almost get bored by the speed. I also did not find myself completely falling for A.B.'s vocal bark, I'd almost expect something wilder to match up with the rapid riffing, but it's not necessarily bad. Wasteworld is a debut that should turn heads just sharply enough that the necks connected to those heads are strained or snapped, and the general quality of the freakish, terminal riffs is enough to recommend it by.