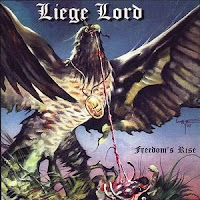 Liege Lord were another of those early US power metal bands in the 80s who seemed to have all the cards in place for success. Solid songwriting, distinct vocals, proficiency and enough buzz through magazines and word of mouth that they would achieve a deal with Metal Blade Records. In a lot of ways, it was a similar story to, oh, Omen. Anvil. Or Lizzy Borden. Not that this band was quite so promising, or nearly at the level of their Connecticut betters Fates Warning, but I heard a lot worse in their day. Freedom's Rise was their debut full-length, with original vocalist Andy Michaud, and he had an edgy, charismatic middle range which he often offset with a shrill falsetto. Personally, I could have done without this screaming, because the lower vox fit the music far better and they seem like an afterthought, to compare with what other power/speed metal acts were unleashing at the time. The riffs were your garden variety Iron Maiden-inspired, power metal trots with dense melodic grace and a steady bass of the Steve Harris variety, but some of the songs have a vibrant energy which resonates even today.

The intro "Prodigy" has a sense for melodic weaving that instantly brought to mind Fates Warning or Omen, the same sensibility for classical guitar amped up into heavy metal, and it moves nicely into "Wielding Iron Fists", a pretty standard mid paced banger which is anchored largely by the vocals. "Dark Tale" is an improvement, with a flurry of solid chords and a catchy, epic feel to the riffs below the verse. "Amnesty" is another middling affair, though the bass is solid and the chords sound good as they introduce the folkish melody. "Rage of Angels" would not have surprised me if it appeared on one of the first three Omen albums, with the exception of Michaud's sharper vocals. It's not a great song, but it's glorious enough to raise one fist to the sky as you slowly bang your head to its neo-Christian dorkiness.

I KICK ASS FOR THE LORD! Sorry. The latter half of the album actually picks up slightly in quality, beginning with the dirty speed of "Vials of Wrath" with its broken rhythms and wild flourishes of lead. "Warriors Farewell" begins with an annoying cry from Michaud, before it starts to rock out like a sea of studded leather gloves shaking at a hooker in a Motley Crue video. "For the King" has a few good riffs, leads, and very busy bass grooving from Matt Vinci, but the vocals pretty much suck to the point of intolerance. "Legionnaire" was fun, especially with Michaud switching ranges from a manly lower pitch to his mid range, evoking a self-parody and much laughter. But the riffs and atmosphere here are solid, and it's one of the better tracks in the end.

Freedom's Rise was not entirely groundbreaking and it wasn't honestly a good album, but it showed what the band might be capable of if they could just reign in the vocals a little and write more towards their strength, that being epic melodies across traditional burning rhythms. I really liked the production, with some good reverb that bounces back at you from the castle walls of its mythical lyrics. I don't enjoy it quite so much as their later work, but if you want some average power metal from the middle of the Golden Age then there are worse examples.

Verdict: Indifference [6/10] (a death sentence on a desert night)