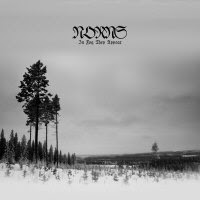 In Fog They Appear was the initial 2005 demo of Finnish band Norns, given a facelift here to inaugurate the birth of Voldsom records in Germany. The three tracks of the demo have been remastered and repackaged with bleak, black and white photography that is only too accurate to the sounds within. Such is an honorable pursuit, and Voldsom has done an excellent job with this, hopefully the first of many such releases. The minimalist approach to the effort is highly appealing (if not entirely novel).

As for the contents, Norns plays an extremely straight form of raw, unsullied black metal that honors the traditions of the genre's great pioneers Darkthrone and Burzum, while channeling the cold landscapes of their native European winter through a repetition of desolate rhythms that are imbued with simplified, epic melodies. This is a harsh, stripped brand of black metal which shares more in common with its Norse forebears than most Finnish countrymen (though you could argue a vague similarity to several of Horna's works). It's not the most ambitious of sounds, but the use of actual drums (courtesy of Vulcan) places it far above many similar works. The band is rounded out by Full Destruction on guitars, and Behemoth performing bass and vocals. The vocals are of particular importance here, for Behemoth has an ungodly rasp which exemplifies this genre, like a hissing wind that speaks the voice of the ages, praising the emptiness and condemning the folly of mankind.

With three compositions totalling over 32 minutes of music, this is the sort of demo that one must assume some patience for. "Descent in the Black Night" is rather short for the form, at just over five minutes, and commences with a blast of timeless, tested grimness that feels as familiar as it does justice to the ripping hostility of a high speed blizzard. Yet the track does not play only to this aesthetic, as the melody after 1:00 is more forgiving, like a wreath of sorrow that surrounds you, to shelter and guide you from this dark boreal nightmare. "Supreme Goat Cult" is over 9 minutes in length, with a similar sadness in its opening, rime covered stream of godless, paralytic chords. Behemoth again shines like a steel blade in the night, his vocals wed in unholy matrimony to the thundering rhythms, transcending (or rather, descending) into the memory. At around 3 minutes, the track breaks down into a slower segment ala Darkthrone, and maintains this pace for some time, shifting into a glorious, late rhythm that rises like a fortress of frost against a barren, level plain. The title track is over 18 minutes in length, and creates a similar saga to the first two tracks, only there is far more repetition, as it meanders through both faster paced and slower sections, my favorite of which is the storming sorrow at the 7-minute mark.

This leads me to perhaps the only complaint I can launch against a band so pure to their chosen form: there are a few points at which the repetition of the rhythms does not support the strength of demo's foundations. These largely occur during "In Fog They Appear", but a minute or two could also have been trimmed from "Supreme Goat Cult". Note that none of the actual riffs are bad, in fact they are beautiful in their simplicity, and for the most part the band never tries your patience. But a little 'trimming of the fat' would have made for a more punctual and effective demo release, still capturing the hopelessness the band excels at. In other words, it could have been just as effective at 24 minutes total as it is at 32.

But this is my only real gripe. I could hardly call Norns an original act, yet they perform this style as well as most other bands at the demo level, and in closing one's eyes to listen, In Fog They Appear does capture the imagery I demand from the tradition. I am unsure as to the status of this band, they are listed as 'split-up' on the Metal Archives, but the members are also involved in some similar acts Vornat and Nattfog. The packaging is superb, with the back panel of the booklet honoring the immortal Darkthrone, and the photography perfect to stare at while you listen through the compositions. I can only hope Voldsom will offer similar works in the future, whether they be re-issues or new releases, for this is a worthwhile initiation to both band and label.