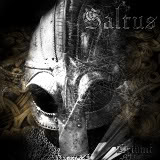 Saltus is a Polish band performing a mix of pagan black and melodic death metal, which you honestly do not hear all that often, but attempts to reward you with the best of many worlds. Triumf is the band's third album in 12 years, a pretty heavy affair which combines low end, driving double bass rhythm with melodeath hooking and both grunts and snarls. Synths are used lighly in the background to add some depth to the compositions, but while the entire album is tightly written and performed, there were only a few points where I found the music crucial enough to pay heed.

"Na Drodze Ku Wojnie" opens the album, and despite an attempt at some glorious melodies, did little for me. "Stary Porzdek" is a little better, with a nice melodic riff at the beginning and them some more brutal, warlike death segments, though it erupts into a fairly typical Dark Tranquillity-like melody later. "Slowianska Vendetta" develops into a sweeping, epic piece with decent chugging low end death and brazen melodies. Most of the remaining album moves at a similar pace, with exceptions being the acoustic "War Song" with a good use of samples in the backdrop, and the thundering "Oblicze Wiary". It's all pretty consistent, if you do find yourself engrossed in the first few tracks then I'd say you will be hooked through the end.

But despite its charms and well-honed combination of genres, I did not find much of a reason to return to Triumf. The musicianship is adequate, the production dark and bombastic, but the hooks just not enough to get under my skin. It's possibly the type of album you will like if you enjoy a lot of hundrum pagan/war metal, more for the atmosphere and lyrical presentation than the actual memorable nature of the music. That said, Saltus is better than a lot of similar bands, they do compose a slew of riffs, just not enough to stick. I've certainly heard worse.