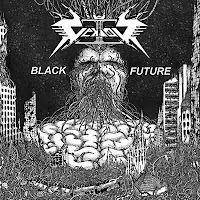 At first glance, I saw this Arizona band's logo and cried out in vain. IMPOSTORS! BLASPHEMY! Who would dare to profane the very Canadian Gods themselves by aping their look and style? Then I actually listened to the album, and found that, while there is obviously some tiny influence from Voivod, the logo is more of a tribute than any statement of stylistic plagiarism. I also discovered that Vektor are a pretty kick ass band with enormous potential. This is tech thrash, with a progressive edge in so much that they very carefully build complex tracks loaded with good riffing that not only flogs your bottom, but actually experiments with mood and atmsophere.

Perhaps a better comparison for this band would be a mix of early Atheist, (sped-up) Death, Deathrow (during their tech phase), Sadus and the obscure NH band Terrahsphere, sans the wild vocals. That is not to say David Disanto does not go off with his impetuous, diabolical snarling, and his delivery certainly cuts through the band's dense rhythmic explorations and 'wall of thrash' approach. Though I don't find this album a be all, end all masterpiece of the genre, it is an extremely refreshing listen, because there simply aren't many bands out there anymore who perform in this style, and Vektor offer a lot more sheer riffing than almost any other young thrash act in the world. Talented is an understatement, because this band's musical skill should turn more heads than Kristen Stewart at the Jr. Vampire Merit Badge convention.

Each track is an exercise in style, beginning with the titular piece, a flurry of intense guitar spikes that flank Disanto's Schmier-like extremities. At the 2 minute mark, the band breaks into this amazing trot with a few layers of guitarwork blowing your mind at once, before a solid thrash breakdown and then some further adventures off into the bleak dystopian rust of the band's lyrical musings. "Oblivion" is given a little kick by Blake Anderson, soon joined by some neo-classic weavings and a good punchy rhythmic thrust. "Destroying the Cosmos" channels everything from Voivod to a little touch of black metallic chord in the galloping riff that precedes the spurious verse. "Forests of Legend" is ambitious, 10+ minutes that kick off with a brilliant acoustic passage lathed in ambient woodland sounds. But fear not, after this moment passes you get nine more in which the band explores a wide spectrum of insanity, and as usual the little plucky guitar melodies that dwell just at the edge of the thick central riffing recall the beautiful surgical misantrhopy of Deathrow's Deception Ignored. The fact you can write a song this long, in this style, and not make someone lose patience speaks volumes.

Voices from inside seem to pull you in
Dark wisdom runs on the still, damp wind
Glow of the eye, fear the gaze
The great ape returns disconnected and changed

"Hunger for Violence" is perhaps one of the most Voivod-like compositions, its opening chords jangle with strange symmetry like something from Dimension Hatross, and as it develops it feels like Piggy and crew jamming with, say, Theory in Practice from Sweden. "Deoxyribonucleic Acid" opens with a classy, Maiden-like riff sped up and ascending into scientific thrashing precision. "Asteroid" tones down the technicality to rock your face off for a few minutes, straying a little further out near the climax of the track as it develops an incredible, thundering extra-worldy charge, the solid bass erupting below like Lemmy if he were to build a time machine and hurl his alma mater Hawkwind a few hundreds years into the actual future. The album then closes with two more epic-length compositions...highly ambitious. "Dark Nebula" is like Pink Floyd's "Astronimy Domine" being covered by alien virtuosos, and no coincidence, another of the few tracks here that really showcases a little of the Voivod influence. "Accelerating Universe" crowns off the album with an initial, anthemic Metallica thrash hammering and then journeys through about 13 minutes of diversity, culminating in the psychedelic, amazing atmosphere beyond the 7 minute mark.

Vektor is simply insane. Here we have a thrash metal band with all the right influence, all the right lyrics, and ZERO retrospective stupidity. For any who doubt the genre's viability in the 21st century, this is another album that begs you to GUESS AGAIN. If you enjoy riffs and technicality with your thrash or death, you owe it to yourself to give this is a listen. I won't say it's perfect, because the actual memorability of the songs could still use some work, but the band excels in nearly every department and there are enough moments of mirth here to grant Black Future some very high honors indeed.