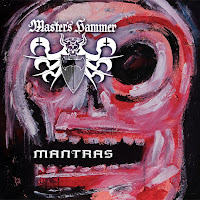 I am such a huge fan of the previous Master's Hammer albums Ritual and The Jilemnice Occultist that I admit I hold any new output from the Czechs to an impossibly high standard. I must not have been paying much attention to the news, because I had very little forewarning that a new album would even exist, yet here is Mantras in all its formidable, bizarre glory. Master's Hammer is not a band new to experimentation: Šlágry was an odd duck which alienated many of the band's original fans, and if you've followed Necrocock's work, his Kaviar Kavalier project is a real trip...and fall, into the pits of experimental obscurity. Mantras borrows just as much from those works as it does from anything previous in the Master's Hammer discography, and the result is an album that, while not sucking, really lacks for that primal, haunted gothic black edge that made their first two so compelling, morbid and beautiful.

Now, Master's Hammer are simply not a bad to dwell on their past exploits, and it was unlikely you were ever going to hear a Jilemnic Occultist Part II. Face facts. It was not going to happen. So the question remains: is the strange pastiche of styles on Mantras good enough to bear the band's monicker? Yes and no. You will hear everything here from traditional pagan/folk black to electro-porn with gothic vocals, but somehow it more than scrapes by on its charms and writing. The core of the outfit is, of course, Necrocock, and his guitars range from the black/thrash of the band's past to sleaze rock rhythms. He is complemented with synths, female vocals, and just about every combination that can make you scratch your head in wonder, including the ol' tympan drummer.

"Typograf" opens with the tympans, and an interesting selection of thrashing chords and organs that create a swirling, whirlwind of chaos that magnificently fits together like the pieces of some puzzle. I especially like the sad little guitar lead before the track transforms into its black metal origins. "Domanín" has some deep, gritty black/thrash rhythms that fit alongside the gothic male choir in the intro, and a nice interplay of acoustics and electric melodies that builds a desperate longing to its bridge. "Až Já Budu V Hrobe Hníti..." is very much old school Master's Hammer, with its crisp riffing and doomed organs, and "Čerti" takes the same organs and transforms them into a more proggish composition, with more great (if simple) leads courtesy of Necrocock. It's a pretty fascinating track, which does not exactly prepare you for the wild Lords of Acid-like techno rhythms that introduce "Bodhi", a smutty tune which would have probably fit in better with a new Kaviar Kavalier album. Yet, it's not bad, and kind of fun, especially the interaction between the little guitar melodies and synths after the 1:00 mark. The deep Czech vocals are...kinda seductive.

But we've got a long way to go.

"Červené Blato" is like stripper rock with deep weird vocals and ghey fashion runway keyboards. In fact, the guitar riff sounds a lot like that in "Free Your Mind" by R&B divas En Vogue, only with creepy Czech dudes vocalizing above it. I don't know whether to love this track or grab a crucifix and some garlic. "Tympan" is a song with tympan and some scintillating keyboard lines that build into a percussive muted picking on the guitar, and then some sort of synthesized pipes drive it home. "Vrana" is sleazy death metal with strange ambient sounds droning across it, and for the verse at least, Franta Štorm sounds like he is coughing up chicken bones. "Propesko" has bluesy guitar slidings, and then becomes like some alien Vegas lounge track, with the Czech whispers echoing across. It does break out some metal chords later, and to be honest this is one of the more interesting tracks of the album, because it's so out of left field that you can't help but sit and stare with your jaw agape.

Are we there yet? No.

"Fantasie" is like some freeform Czech sex poet strutting his sexy throat music over some sleazy porn music, while strippers festooned in masquerade costumes spread and shake across the stage behind him. "Ganesha Mantra" is Master's Hammer's take on tribal Hindu techno?! Does that even make sense? The song is like something Mr. Bungle might try, and Necrocock & crew somehow pullit off. Jáma Pekel begins with creepy creature sounds, also like something Mike Patton would use on a track, but then it transforms into a punkish black metal rhythm and some weird, jangly acoustics that hover over the bridge riff. Quite nice! "Epitaf" closes out the album with chugging nu-metal rhythms, busy percussion and more of the slavic vocal slather.

If you've made it this far with me, you are probably wondering, what the FUCK did you just listen to? It's as bizarre as anything Master's Hammer have offered to date, not to mention the work of its constituent Necrocock. But, strangely enough, after my initial revulsion came wonder, and perhaps even a bit of joy. This is not the band you used to love in the late 80s/90s, but it's a staggeringly original entity worth the risk of the more daring avant-garde metal fan. The album brims with sexuality, cosmic energy and gothic black metal roots, all at once, and forms them into an album with a great many sounds to experience. Is it perfect? Absolutely not, and I would not put it on a level plane with Jilemnice or Ritual. But it does rock, in a weird way, and I feel my fondness for it increasing like a pulse in my pants.

Master's Hammer have been a band of weirdos for quite awhile. Isn't it time we caught up to them?

Highlights: picturing in your mind what videos for some of these songs might be like. Dibs on the alien transexual midget carousel.