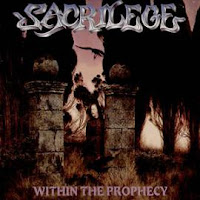 As soon as the opening space organs of Within the Prophecy part way for the shuffling drum march and melodic outpouring of the guitars, you know you are already in for something a little different than what you heard on Beyond the Realms of Madness. This is the 2nd album of English Sacrilege, and it has only a little in common with its predecessor, that being the filthy speed metal edge and the production of the guitars. Much of this album reminds me of early Slayer (the first two albums), it has that same raw fuel to the guitars, though Sacrilege had a more natural predisposition towards melody, and the album sounds really raw.

Tam's vocals are not a far cry from her prior work, but they pierce and cut here straight through the walls of guitar riffs. A little cleaner, but still pretty scratchy and gritty when they need to be. The rest of the band is rock tight, with driving rhythms, thundering if tinny drums courtesy of Spikey T. Smith, and a soft if present bass that hangs out below to center the very fuzzy, thick guitars. Within the Prophecy is not quite hooky enough to bring it level with an album like Show No Mercy, but that is certainly the tree up which it is barking, and it does get about half way there before the 45 minutes is out.

"Sight of the Wise" features the aforementioned proggy intro before its thrashing erupts, and I half expect Tom Araya to pipe in with his vitriol. There are some good leads here, and it's an enjoyable tune for the speed metal afficionado, though it has no specific riffs which stand out far. "The Captive" is carved out with plodding bass rhythms and burnin' rock & roll leads before a lyric pattern that wouldn't have been out of place on Hell Awaits breaks in, and "Winds of Vengeance", one of the longer tracks (at over 7 minutes), thunders forth with a rhythm that feels a LOT like "Angel of Death". There are not a lot of lyrics on this track, and probably too much time spent without them, because the riffs are not really good enough to support themselves. "Spirit Cry" has some mellow breaks with the lead and the bass, but again the song suffers from a general lack of vocals (when they do appear, they are great.) "Flight of the Nazgul" shows some pre-emptive doom leanings, and "The Fear Within" is passable. The final track of the album, "Search Eternal", is an epic at nearly 11 minutes in length, and it's the best thing you'll hear on Within the Prophecy, kind of a pastiche of rhythms from other songs with a lot more lyrics, and the song develops some fair moments of leads and balladry near its closure.

Crowding every corner, with the prizes of knowledge
Creating lonely wastes, with empty ignorance
Filling time with reason, dismissing wonder endlessly
That is lost and can't be found, search for eternity

This is the least impressive of the Sacrilege albums, because it doesn't really find much of a footing on its own, and simply apes many other speed/thrash/power metal albums of the time, the only real difference being Simpson's voice. The lyrics are still as meaningful of the debut, simply more introspective and ponderous. Unfortunately I always compare this to Holy Moses' excellent Finished with the Dogs, which came out the same year and is leagues ahead of this in both songwriting, aggression and charisma. Though competently performed, few of the riffs of Within the Prophecy merit enough memory to revisit.