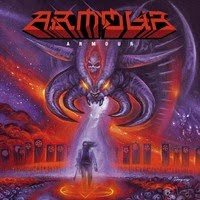 Armour is another of the many projects of 'Vince Venom', more often known as Werwolf, or Nazgul, of Satanic Warmaster, Warloghe, Incriminated, the former vocalist of Horna, and a number of other projects which have infested the Finnish underground like ticks. He's been workin on this band for a few years now, producing a series of demos, EPs and singles which showcased a very old school, raw 80s heavy metal style. He's managed to build a lot of anticipation for this band, since 'retro' is all the rage right now, but few bands are reaching back far enough, or hitting up the less popular style of big 80s European steel.

The main characteristic here is the high pitched, grating vocal charisma Vince is using to front the band, which celebrates the styles of Brian Johnson (AC/DC), Udo Dirkschneider (Accept, U.D.O.), Blackie Lawless, and even Tom Keifer of the glam metal legends Cinderella. For some younger metal heads, or fans of his other, blacker bands, this may prove a large hurdle to cross, but if you're accustomed to the aforementioned influences, there is really no reason you'll be put out when listening to this. It's cheesy, and intentionally so, with the 80s laymans' 'rock and roll' song titling and a slew of simple hard rock rhythms which run the gamut from the above influences to Dokken or W.A.S.P., old Def Leppard to Saxon. This album is anything but ambitious. It's fun, and created simply to revisit (and perhaps revive) a moment in time where metal was about balls out arena performance, big choruses, and just enough talent to score some cocaine or hairspray divas.

Let me put it to you this way: the album begins with a song called "Rock'n'roll Tonite", and ends with a song called "Heavy Metal Drinkers". That is about as deep as it runs. Most of the tracks are pretty inoffensive, with guitar riffs that seem as if they took :30 seconds to compose. But what more is needed? You play a few songs, your frontman gets out there in leather in front of the crowd, you rock their faces off, and ensure that you are all getting laid. Such was the mentality of about 90% of the tasteless hair metal masses of the 80s, but Armour lets down the hair and instead wants us to remember the more enduring acts (some of whom continue to rock all these years later).

All the writing here is so damned fluffy that it becomes difficult to distinguish any high or low points. "Sex Demon" has a nice, steady rocking muted rhythm which is flavored with big chords and hilarious vocals like: Girl you're gonna scream tonight, when my bullet hits the spot. Ah, the proto-perversion! In, "Roll Out (or Get Rocked)", Venom uses a deeper, dirtier vocal line to offset his shrieking, and the riffs are the variety of old school hammering that would go on to create the entire power metal genre. "Satan's Knights" is good and fast and hard, and "Magick Armour" is another pretty kickass primal power metal tune which should have fists banging long after the lighters die and the girls get wild. Probably my favorite track here would be the high speed racer "Hellfire", which is A+++ would do business again material.

Armour sounds like an 80s record, but perhaps a little brighter for the jaded, latter day crowd who may take such a thing for granted. The guitars hiss with a crisp tone and the vocals pierce straight through. This is ultimately a successful celebration of all things cheesy about the good ole times, where the lines between hard rock and heavy metal blur and the party rages all night long. How it sits with a modern audience will depend on how much they can lighten up and enjoy themselves with a fun, largely forgotten sound. This is no Carelian Satanist Madness, but it had me dreaming of lines, leather, and that mouldering denim jacket in my basement closet.