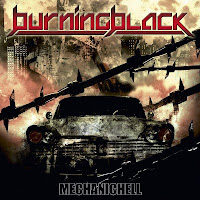 Limb Music has once again heard the call of talent and snapped up Italy's Burning Black, an aggressive speed/power metal band with an emotional vocalist whose wild, bleeding throat catapults the writing over the walls of mediocrity and into the realm of enjoyment. Complete with non-Italian stage names (I don't get it, either) and a slew of simple but energetic compositions, MechanicHell seeks and destroys the debut Prisoners of Steel, offering one of the more entertaining albums of its kind to appear this year. Burning Black seem to hold all the cards, capable of writing both fast and furious traditional metal tunes and ballads that actually draw you in and never spit you out.

The riffing is pretty average, in fact it will remind you of a great many Priest-like acts or power metal in general...kind of a midpoint between Primal Fear, HammerFall and Stratovarius. Musically, there is no intention to re-invent or innovate. But what instantly elevates this beyond a simple knockoff of a style you've heard all too often is the charm of Dan Ainlay's screaming, which sounds a little like Germano Quintabà of Centvrion, except far more restrained, or perhaps the harsher edge of Piet Sielck or Ralf Scheepers. With a cleaner frontman, MechanicHell might not have the same impact, but Ainlay's just vicious. Let me be clear though, if you're simply looking for another Joacim Cans or Andi Deris, his voice is probably not for you.

Though this album is lacking for any weak tracks, I do prefer when the band breaks out and goes wild. Tracks like "MechanicHell" and "Messengers of Hell" will run you down like a pickup truck loaded with dynamite, in particular Ainlay turns himself into a sonic weapon in the latter. But the real show stopper of the labum is "Dust and Rain", which begins rather innocently, stock 80s heavy metal rhythms until the vocals enter the picture. Yes, Dan Ainlay screams like a goddamn nightmare siren over the entire song...or a strangled cat, depending on your preference. This may test the patience of some, but it is actually very mesmerizing, and this is my favorite track here, just for the way in which the screaming interacts with the chords and melody. Over the top would be an understatement. For those seeking safer fare, well, Burning Black also does that with big rockers like "Reborn from My Sins", "Hero of the Century", and "Secrets to Hide". The ballad "Victims and Torturers" is saved for the climax, and it's done quite well, with glistening acoustic guitars and vocal melodies that slowly drag you under.

I'm not sure just how wide reaching Burning Black's appeal would be in a world obsessed with Dragonforce and the like, but this is some well-produced, fun heavy/power metal that I would recommend if you find yourself hot and bothered during the screams of Ralf Scheepers or Rob Halford. Ainlay can go lower, and he can certainly clean the voice, but he thrives in that air strike missile range where only the eagles dare to fly. Metal eagles. Burning black. Through the sky.

Highlights: Reborn from My Sins, Secrets to Hide, Dust and Rain, Messengers of Hell

Yeah, his voice definitely hits the spot for me.