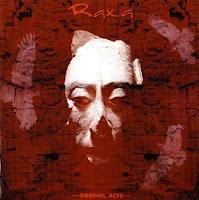 Rabinal Achi, the sophomore effort from Russian Raxa, surprises me, because my fondness for the album has taken a nosedive since I first listened and loved it. All the components remain in place from the debut Oxlahun Ti Ku: the guttural vocals, the heavy use of keyboards, vocal samples, and ancient Latin instrumentation to create a place of both solitude and doom, documenting the rise and fall of a culture. But Rabinal Achi takes on a slightly more progressive edge, for example, Lefthander uses a few more clean vocals, the tones sound thinner, and less pure chug is used to drive all its components. This is nothing to scoff at, and the album still qualifies as good, but it feels subdued in comparison to its predecessor, and certainly when compared to the later MezoVedic.

"U Nabe Banbal" is the intro, a dark ambient piece with some vocal sample (spoken and singing), followed with "U Nabemul Ca Chau Queche-Achi", which roils with beautiful chords and then breaks into a very gothic doom sequence with pianos and dirtied, but cleaner vocals that feel like a narrative. Left breaks out his cleaner vox later in the track, but overall it doesn't feel like such a strong piece. "U Nabemul Ca Chau Rabinal-Achi" is a step up, with a gong to create some mystique over the playful tribal rituals of the synth, and then a brutal wall of chug. "Mun" features a female guest vocalist Yana Veva, whose ethereal tones soar over the new age vibe of the track. "U Camul Ca Chau Queche-Achi" is a little dorky sounding, but there are some sparse passages of throaty vocals and percussion which make for a nice lead-in to the death and doom. "Roxmul Ca Chau Rabinal-Achi" is dull save for its windy ambient break around 2:30, but "Roxmul Ca Chau Queche-Achi" is one of the more solid tracks, with nice pianos and strings and a powerful feel to its mix. The album ends in "U Cahmul Ca Chau Rabinal-Achi", another track which starts rather weakly but grows in strength as it proceeds and explores the further tribal boundaries of its vision.

Some albums grow on you over the years, but Rabinal Achi is one that has decayed on me. I can recall being blown away on the first listen, but since it has devolved to just passing by through its atmosphere. It's my least favorite of the three Raxa works released thus far, but even this contains hints at Lefthander's skill and it's impressive enough as a one man effort.