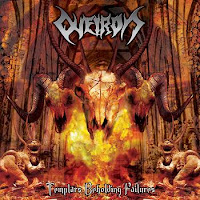 Two years after the lackluster Impious Domination, Queiron returned to the studio to grind out their second full-length Templars Beholding Failures, which was to be superior in every possible way, with the one possible exception remaining the band's adherence to blind bouts of infuriating speed that does little else than to blast beyond your ears into the infernal landscapes of the band's imagination. However, the album sounds quite a lot better, with a more balanced drum/guitar attack and bass that still sounds as busy but is not quite so prevalent. Grous' vocals sound a little hoarser, but there is not much different there. The guitar solos shred a little harder, there is a bit more attention to evil old school riffing, and the entire package simply feels more hostile. And hostile is exactly how this style of death metal needs to be.

This album, of course, reminds me even more of Krisiun than the last, because the two bands share that same penchant for writing fast and playing hard and very rarely letting up. It does not always work out well, especially in a world where a death metal fan can reach for any of hundreds (if not thousands) of well written, dynamic works that can sate both their desire for brutality and songs. It's hard to be too hard on this sort of album, because clearly the intent was to punish punish punish in the name of godless extremity, and if that's all you seek, well Queiron has your number right here. Fully half of these songs went straight into one of my ears, juggled around in my neck until it was about to fracture, and then popped back out the other side.

In fact it wasn't until the 5th song "Weakening of Divine Essency" that I started to perk up and pay more attention. Because after a pretty interesting, ritual metal intro "Odium Denuntiatus", the next three blew right on by like a stagnant abysmal wind. "Weakening of Divine Essency" opens with some hammering double bass and thick chords that quickly build a charging momentum, then a break for some hyper thrashing rhythm ala Slayer on crack, and later some nice winding patterns develop, though something other than the constant blasting from the drummer might have better distinguished it. A few of the other, later tracks are also pretty decent if you enjoy nonstop death barrage, such as "Defying Ancients Sanguinary Gods" or the often Deicide-like grinding of "The March of Crucifiers", and the closer "Fire Ostentation" for its glorious, thick chords in between blasting fits. But even though these songs stand at the very peak of Queiron's writing, they are still hard to qualify as impressive beyond their tireless butchery.

On a technical level, Templars Beholding Failures is more impressive than its predecessor, and it sounds quite ruthless, grinding and pissed. But for all their speed and energy, the riffs simply do not dazzle. I would offer this as the starting point for checking out the band, because it is likely their best album. I enjoyed it more than their latest The Shepherd of Tophet, but Queiron still need to bridge the gap from just being good at creating an unceasing momentum of slaughter to the wide realm of possibility that better songwriting could give them.