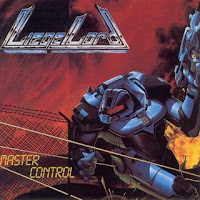 The third time is the proverbial charm. So, Liege Lord hires Bruce Dickinson, throw a mecha battlesuit on the cover of their 3rd album and it could only be a win win situation for everyone, right? Well, more or less. Bruce Dickinson wasn't available, so they hired Joe Comeau, who sounded a lot like Bruce Dickinson if he were to pop some amphetamines and front a faster American band (rather than that little known English group he stuck it out with.) You may know Comeau better from his later vocal work in Annihilator, or his stint playing guitar for Overkill, but he excelled here in Liege Lord. Coincidentally, you'll also hear a little of Bobby Blitz' early snear and snap in Joe's intonation. And sure, while his vocals were...not entirely original, they were far more precise, reined in and powerful than the wild musings of Andy Michaud.

As for the robot on the cover...well, one can dream, but it doesn't have a lot to do with the album aside from the lyrics to the titular track itself. It was still pretty damned cool in 1988 to see this cover art, and the band had finally settled on a half-decent logo. Master Control is, in fact, superior in all ways to both of its predecessors, offering a half dozen classic US speed metal tracks which more than compensate for any shortcomings. It's the heaviest and most consistent offering, with big, meaty rhythms that Comeau complemented rather than drowned (as was so often the case with Michaud). It's not perfect, and was sadly overlooked due to the presence of Operation: Mindcrime, No Exit and Seventh Son of a Seventh Son, but in retrospect there is enough ass kicking contained within the 42 minutes that it deserves some sort of attention, even after two decades.

Liege Lord have once again decided to come out swinging, and they do so with some stark chords and early leads to introduce "Fear Itself", before the thrusting bombardment of its verse and furious verbal artillery. Highway. What highway? We left that in the dust, we have just entered orbit, and Joe Comeau is your pilot, ladies and gentlemen. "Eyes of the Storm" is simply a call to arms for any fan of melodic power metal, perhaps the greatest Liege Lord song of them all, with a chorus very much worthy of Maiden or anything Dio has ever done. "Master Control" returns to the speed of the opener, with a momentum not unlike Overkill, initial leads that sizzle through the rhythm guitars of the verse. Speaking of Dio, we next have a great cover of Rainbow's "Kill the King" (one of RJD's best songs, from one of few good albums). Comeau and crew do this track a lot of justice, and it's vastly superior to other cover versions I've heard. "Soldiers' Fortune" is just awesome, with another of the band's more memorable hooks. Note the little lead swirl that follows behind the charge of the chorus.

The hit machine does not end there. "Feel the Blade" is not one of the best tracks on the album, but at the least it rocks hard. "Broken Wasteland" is pure mid-paced power metal, performed at a total Priest/Sabbath pace with a killer, winding dual melodic hook that breaks into the glorious verse. You have to hear this one to believe it. Excellent. "Rapture" has a forceful stride, with chords that slam and shine across the throbbing undercurrent, and total headbanging rhythms. "Suspicion" has vintage Vinci bass, and some great NWOBHM rhythm to it, very much a Maiden tribute all doped up. "Fallout" is a melodic power ballad, but unlike "Speed of Sound" (which closed out Burn To My Touch), this one is actually good...and before long it erupts into a totally kickass nuclear war anthem.

Yes, Master Control was pretty damn good. But it was 1988...and being pretty damn good was simply not enough to shine in the eye of the roiling metal masses. Looking back, it's hard to understand why this one wasn't larger...except maybe that it wasn't a thrash record, and that style was the darling of the day (Metallica, Slayer, Megadeth and Anthrax all had very successful albums out in '88, not to mention the genius works and career highlights of many lesser known acts). Also, it would have been almost impossible to compete with the flawless, endless beauty of Operation: Mindcrime, from a band who likely shared most of the same fanbase as Fates Warning or Liege Lord. Speculation aside, this is still a strong sounding effort decades after the fact, and well worth your time to track down if you appreciate 80s speed and power metal classics. Here is a band who would end on a high note.