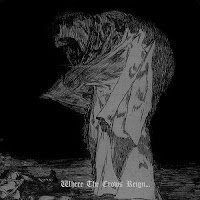 Kuturlat is a band out of Spain playing a pretty straight style of black metal with rapacious vocals and their independently issued sophomore effort is following up their 2005 debut NecroRitual. These four manage a pretty wicked sound which draws on all the expected classics (Hellhammer, Darkthrone, Mayhem, etc) but also I noticed a similarity to the past few Satyricon albums, if only in the band's ability to create a villainous groove, and this is one of the fortes of Where the Crows Reign...

A dark ambient intro plays like a video game fantasy battle pre-amble, before the thundering "War Sound of Metal" commences with seething black glory, though nothing too impressive or original. "Suicide Times" starts at a painful crawl with some sinister speed lines razing across the beat like bloodied claw marks on a corpse, and "Cold Winter" returns to the driving pace of "War Sound..." Far better are the groovier tracks found across the album like "Fuck J.C." and "Blood for Satan", which rock out with abandon as they espouse their pedestrian but fun-filled anti-Christian virtues. Other decent cuts include the title track and the barbaric closer "Ayam (Irrational Brute)" with its thrashing breakdown.

Where the Crows Reign... is what it is. Nasty and sacrilegious black metal. I think the band could use a little work on the lyrics and song titles, since these seem to be culled from a rather generic crop, but the music is solid enough and certainly the delivery of the vocals is crude and worthy of throwing the horns. I don't hear a surplus of Spanish black metal, but Kuturlat is decent enough that those who crave the most blunt and direct strain of the sound might get something out of their albums.

Highlights: Fuck J.C., Blood for Satan, Where the Crows Reign